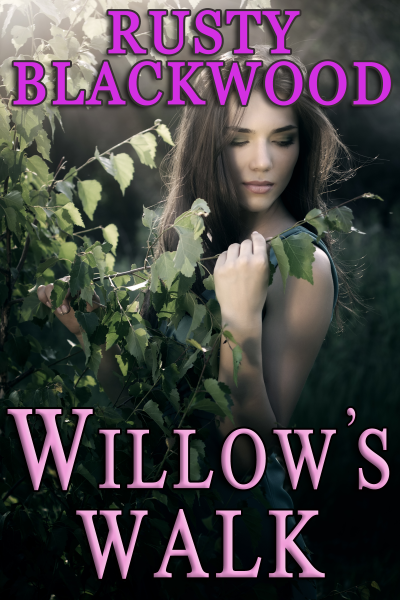 The path each person walks is entirely their own

The pitfalls along that path, as well as the way in which they are dealt with are entirely up to the individual. But Willow Sutherland-Crosby walks a far-different path, and with her own agenda.

Abuse, deception, intrigue, and a never ending quest for happiness and love – will she find these, or will her blind determination be her downfall?

The 5-star romantic fiction drama, Willow's Walk, is a gripping new tale, certain to hold readers captive from the very first page. Set in the beautiful city of Ottawa, Canada in 2003, this touching story centers on the life and times of a woman determined to prevail at all costs, regardless of what is set before her, the result of which is certain to leave the reader reeling in its wake.

Get This Romance Book From Amazon.

Canadian author Rusty Blackwood, whose pen name is derived from the colour of her russet hair, and her estranged husband’s Scottish great, great grandmother’s maiden surname Blackwood, loves to write, and this has been demonstrated many times through the assorted titles and genres of her work, ranging from poetry, children’s short stories, comedy, and romantic fiction drama, her favourite genre, and for which she best known. Rusty has written 13 titles to date, and is presently working on her 14th, Return to Autumn, the anticipated follow-up to her 5-star-multi-award- winning romantic fiction drama, The Perils of Autumn.

Rusty is the recipient of a bronze medal from the International Open Amateur Poetry Contest, sponsored by poetrypoem.com for her 2005 poem, Desire. She has been honoured for the 3 consecutive years of 2017, 2018, and 2019 as a Nominee for Top Female Authors, sponsored by The Author Show.com. She was also honoured as a Finalist in The Author Show’s 50 Great Authors You Should Be Reading.

Though she is unprofessionally trained in the field of writing, she has a commanding understanding of the English language paired with a never-ending imagination, and has written all her life, finally becoming a serious writer in 2001 & a professional, Independent author in 2009 with the release of her first poetry collection, Feelings: A Rhythmic Journey in Thought. She followed this in 2010 with her first collection of children’s shorts, Young Minds. She released the first part of the original 2-part romantic fiction drama, Passion in Paris, subtitled Connections to the Past in 2010, and followed by the second part, Directions of the Heart in 2011. Also in 2011, Rusty released her second poetry collection, Impressions: Poetic Rhythm in Emotion along with her second children’s collection, Through the Eyes of Innocence. In 2012 Rusty released her first adult comedy, The Misadventures of Derwood Tugbottom. This comedy was the first in what would become an ongoing comedy series. In 2013, Rusty redone her 2-part romantic fiction drama into a totally revised, with additional content, grand scale, and released it under the title, Passions in Paris: Revelations of a Lost Diary. It became her first 4-star novel awarded such by Amazon. In 2016 Rusty released her first 5-star novel, awarded such by Readers Favorite Books, the celebrated romantic fiction drama, Willow’s Walk. This was followed in 2017 with Derwood Returns, the second installment of the Derwood Comedy Series. This was followed in 2019 by the third installment, Derwood Goes Caribbean. In January of 2019, Rusty released her pride and joy, her 5-star-multi-award-winning romantic fiction drama, The Perils of Autumn, published by Tellwell Talent Publishing.

Rusty is a retired professional musician, guitar, bass guitar & vocalist having performed for many years with her family’s country music band, The Midnight Ramblers, and later with the country rock blues band, MIRAGE. Rusty is a great lover of the Arts in its many forms including music, art, acting, and stage. She also holds two Diplomas in Interior Decorating & Design. She is a great celebrant of nature, and follows the Christian faith. When not writing, Rusty loves spending quality time with her family, consisting of her two wonderful sons, whom she is immensely proud, and their families. She loves & adores her wonderful grandchildren consisting of 3 beautiful granddaughters, one handsome grandson, and two precious great grandsons whom forever holds her heart in their hands. She is anticipating the arrival of a new great grandchild in early April of 2022. Rusty loves animals, especially horses & dogs, but she will forever miss her dear cat & confidant, Tipper, her true friend for 18 years. Rusty grew up on her paternal grandfather’s farm in south-western Ontario, but for years has resided in St. Catharines, located on the northern shores of Lake Ontario.