You are here: Home / Featured Books / The Satanic Chapel by Bob Price 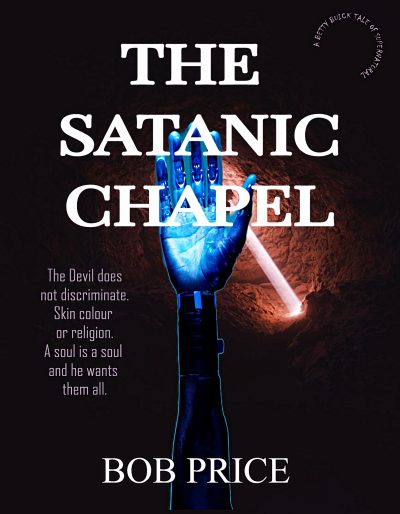 The Satanic Chapel by Bob Price

The Devil does not discriminate. Skin colour or religion. A soul is a soul and he wants them all.
Believing yourself to be in a position to control the Devil has been the ambition of many Satanists over the centuries. None has yet proven successful because the Devil has his own agenda and knows exactly what people are about. Yet even in the twenty first century they continue to try ignoring the failures of the past at their own peril.
Members of The Satanic Chapel had reached a point of self-confidence when they too felt ready to take the next step. An invitation to the Devil himself to visit and help them rule the world of humans. It was an ambitious plan that was years in the making and now it was finally ready and wheels within wheels were moving to make it a reality.
When odd things happen different police units are employed to investigate. After authority figures were reported missing a standard investigation unit became employed to find them. A less than standard unit called Irregular Missing Persons (IMP) also received instructions to investigate. Few outside IMP had even heard of them and so it was that the lead officer Superintendent Frank Marshal encountered Superintendent Betty Buick from IMP for the first time.
Buick's instructions to take a purely advisory role during the investigation led by Marshal her counterpart was less than ideal, but with a new boss who appeared to detest the very thought of IMP:she was constrained to play tag, something she never did that well.
If, as Buick thought, that the supernatural was somehow involved she determined it wouldn't be long before IMP was called upon to do more than simply advise. She wasn't wrong.

Get This Horror Book From Amazon.

Bob Price settled in Northern Ireland and writes fiction in multple genres including the supernatural. His interest in mystical, predictive and supernatural matters spans thirty years.