You are here: Home / Featured Books / The Moonstone Girls by Brooke Skipstone 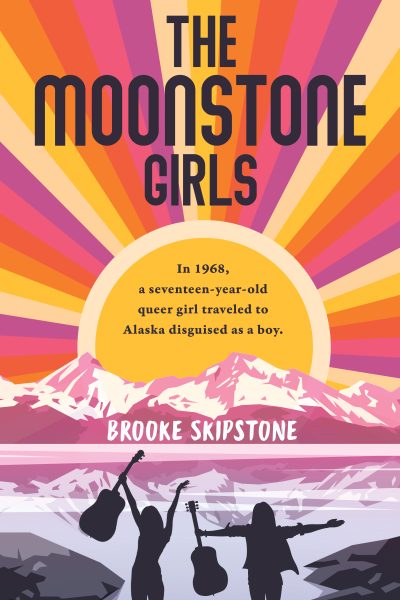 The Moonstone Girls by Brooke Skipstone

KIRKUS STARRED REVIEW: “A moving and romantic coming-out story and a triumphant celebration of lesbian liberation.”

Though both feel awkward in their own skin, they have to face who they are—queers in the late 60s.

When both are caught with gay partners, their lives and futures are endangered by their homophobic father as their mother struggles to defend them.

While the Vietnam War threatens to take Spencer away, Tracy and her father wage a war of their own, each trying to save the sweet, talented pianist.

At seventeen, Tracy dresses as a boy and leaves her parents in turmoil, with only the slimmest hope of finding peace within herself. She journeys to a girl with a guitar, calling to her from a photo, “Come to Alaska. We’d be great friends.”

Maybe even The MoonStone Girls.

Get This LGBT Book From Amazon.

Brooke Skipstone is a multi-award winning author who lives in Alaska where she watches the mountains change colors with the seasons from her balcony. Where she feels the constant rush toward winter as the sunlight wanes for six months of the year, seven minutes each day, bringing crushing cold that lingers even as the sun climbs again. Where the burst of life during summer is urgent under twenty-four-hour daylight, lush and decadent. Where fish swim hundreds of miles up rivers past bear claws and nets and wheels and lines of rubber-clad combat fishers, arriving humped and ragged, dying as they spawn. Where danger from the land and its animals exhilarates the senses, forcing her to appreciate the difference between life and death. Where the edge between is sometimes too alluring.

The MoonStone Girls is her fourth novel. Visit her website at brookeskipstone.com for information about her first three novels—Crystal’s House of Queers, Some Laneys Died, and Someone To Kiss My Scars.