You are here: Home / Featured Books / The Letter Carrier by L.C. Lewis 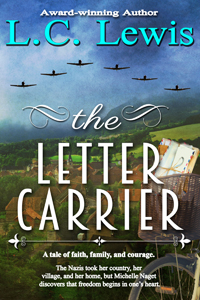 The Letter Carrier by L.C. Lewis

A WWII coming-of age story based on three years of interviews with Michelle Naget, whose family members spent four years as captives in their own home after it was commandeered by the Nazis.

“This book should be mandatory reading for every student in grade 10.” N.N. Light, author.

“The Letter Carrier absolutely took my breath away.”

When the German march across Europe reaches France, young Michelle Naget and her family join the throngs fleeing for safety. But their flight ends in capture by the Nazis, with one member of the family taken, while the rest of the family is sent back to their village of Braquis, France, to serve the enemy who has commandeered their home.

For the next four years, the Nagets live in the crosshairs of the enemy living under their roof and of the neighbors who question the family’s loyalties. Every day becomes a test of faith for Michelle-in God, in family, in the hope that the Allies will come, and in the letters from a young French rebel named Légère who promises Michelle that she will be free again.

But when the Nazis’ torment increases, and the razor-thin line between life and death narrows for the Nagets, the family’s motto, “We do what must be done,” and Michelle’s faith in God, give her the courage to face her enemy and do whatever she must to protect the family she loves.

Laurie (L.C.) Lewis is a weather-whining lover of Tom, her four kids, their spouses, and twelve amazing grandkids. She’s also crazy about crabs, nesting boxes, twinkle lights, sappy movies, and the sea. It’s documented that she’s craft-challenged and particularly lethal with a glue gun, so she set her creative juices on writing, which was less likely to burn her fingers.
Born in Baltimore, Laurie will always be a Marylander at heart, but a recent move to a house overlooking Utah Lake makes Utah her new love. Her Maryland years, spent within the exciting and history-rich corridor between Philadelphia, Baltimore, and D.C., made her a politics and history junkie. During a seven-year stint as a science-education facilitator, Laurie honed her research skills, eventually turning to writing full time.
The Letter Carrier is Laurie’s fourteenth published novel. She writes in multiple genres, penning her women’s fiction and romance novels as Laurie Lewis, and her historical fiction novels as L.C. Lewis.
She’s a RONE Award Winner (The Dragons of Alsace Farm) and was twice named a New Apple Literary Award winner in 2017 (The Dragons of Alsace Farm) and in 2018, winning Best New Fiction (Love on a Limb). She is also a BRAGG Medallion honoree, and she was twice named a Whitney Awards and USA Best Books Awards finalist.
Laurie’s next book, “Revenge Never Rests,” is a romantic suspense novel set to be released in December 2022 by Covenant Communications.
Laurie loves to hear from readers, and she invites you to join her VIP Readers’ Club or contact her at any of these locations.