You are here: Home / Action & Adventure / The Legend Is Born by Gerald R Knight 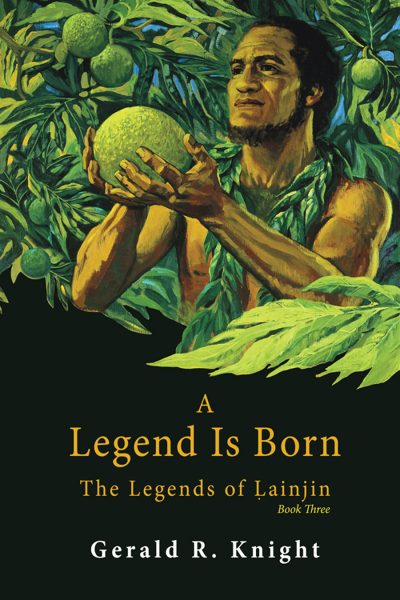 The Legend Is Born by Gerald R Knight

This faraway, pre-contact story begins with Helkena, a young, still untattooed girl enduring a typhoon crashing over the only island she has ever known. Her home is Wōtto, one of the dry, windswept atolls of the northern Marshall Islands. The newborn infant Ḷainjin has just been entrusted to her care by his mother, who has sailed her fleet of proas into the open ocean to save them from certain destruction.

Helkena, having barely survived the storm, must now travel to Naṃdik, a wet atoll in the southern rain belt of the Rālik Chain. As Ḷainjin’s surrogate mother, she will sail with the infant by outrigger canoe in the company of his maternal grandfathers. These kind men had recently helped the Wōtto Islanders overcome the terrible drought that typically follows a typhoon. With the trade-wind season approaching, it’s soon time to complete their voyage. The grandfathers begin teaching
Helkena the traditional navigational arts along the way.

Her goal is to get her tattoos on Naṃdik and, in time, to find a man there to take home to Wōtto. But will she entice a man from the lush south to her barren desert island?

Far from being a simple story, this colorful, romantic tale presents a surprising background to the lovemaking culture of the Marshall Islands. This is a free introduction to the early years of young Ḷainjin, the hero of the Legends of Ḷainjin historical literary fiction series

Gerald was only 19 when he entered the Peace Corps in 1967 after two years as a literature student at Albion College. After graduation he returned to the Marshall Islands with a love for literature and an interest in transcribing the stories he had heard in previous years. He taught for a year and worked as a commercial fisherman for two, honing his knowledge of the language and culture. Then he went for an uninterrupted four year stay on remote Rongelap Atoll to study with the renown traditional navigators and storytellers there. In 1979 he attended a one-year apprentice program at the Bishop Museum in Honolulu to prepare as Director of the Alele Museum and National Archive. He held that position for ten years culminating in a two-year collaboration with the Field Museum of Natural History on their permanent “Traveling the Pacific” exhibit that features a donated traditional outrigger canoe.

In 1999 Gerald graduated from the University of Illinois with master’s degrees in business administration and accounting. He currently heads a thriving CPA tax practice in Palos Hill, IL. He has completed the Chicago – Mackinac Island race five times and been a member of the Columbia Yacht Club since 2005.