You are here: Home / Featured Books / Passions in Paris: Revelations of a Lost Diary by Rusty Blackwood 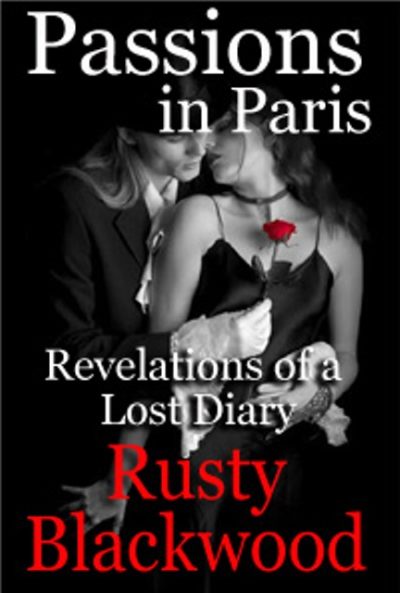 Passions in Paris: Revelations of a Lost Diary by Rusty Blackwood

A forgotten diary, lost for forty years, reveals the story of a rediscovered love nearly lost in 1999 Paris. An unforgettable romance filled with danger, intrigue, and a love without boundaries, Passions in Paris: Revelations of a Lost Diary tells the story of forbidden love, salacious adultery, cunning jealousy, and unrequited love.

This complex and stirring story, revolving around star crossed soul mates, Canadian author Joy Wychmere, and Irish actor Cullen Malone, tells how their immeasurable love is put to the test by three vindictive people, the worst, namely Philippe Robealard, a delusional, misguided homosexual artist who is determined to make the unsuspecting actor suffer for stealing the man he loves, until he has paid in full with his life.

Joy and Cully battle through a series of misunderstandings, embarrassment, torture, and injury until Joy is left fighting to survive a direct gunshot, while Cullen is given the choice of consuming a bottle of barbiturates – certain to take his life – or lose Joy forever if he does not. If this is not enough, the trapped couple’s fate grows direr when fire is discovered raging towards them. Endurance and determination is stretched to the limit, asking if love truly can survive all odds, and time.

Get This Romance Book From Amazon.

Top ranking romantic fiction author Rusty Blackwood believes the flair for fantasy is anything the mind wishes it to be, and she is a master at this. Within her expressive mind is found an endless array of romance, passion, textures and colours to sweep the reader to exotic, faraway places where anything is possible, proving that her words really do leave you breathless.

Canadian born Blackwood, whom chose her plume de nom by combining both the colour of her russet hair with her estranged husbands’ great, great, Scottish grandmother’s maiden name, grew up on her paternal grandfather’s farm in southwestern Ontario, Canada where she developed her love of writing while still in grade school, entering numerous competitions and writing exhibitions throughout her area, and attributes her love of writing to her late father James Beecroft, and to the late Gladys Carroll, her elementary teacher. Although unprofessionally trained in the field, Rusty has always shown an affinity for the written word, a gift to express it, and has demonstrated this talent many times since becoming a serious writer in 2001.

In March of 2012 Rusty released the comedy short, “The Misadventures of Derwood Tugbottom,” her first in the Derwood Comedy Series that centers on the outrageous antics of the eccentric Derwood Justice Tugbottom, a retired London England civil servant who is forced into retirement and decides to spend his golden years in Canada, much to the chagrin of those he encounters. This title was chosen by ManyBooks.net Best Books for May 2020 in the category of Best Literary Fiction.

Following a previously hard fought, misguided, and misleading publishing road into the competitive world of mainstream fiction in 2010 & 2011 with her first two-part romantic drama, “Passion in Paris’ – Connections to the Past” and “Directions of the Heart” respectively — Rusty was finally given the chance to accomplish what she had originally set out to do by writing this story in one novel, and this exciting reprieve can be found within the pages of her Amazon awarded 4-star, heart-touching romantic drama, “Passions In Paris: Revelations of a Lost Diary, which she released in 2013. This grand scale, heart-touching saga centers on two star-crossed soul mates who are fortunate to meet again in 1999 Paris during the festive Christmas season, and are immediately thrown into a series of tumultuous misunderstandings, the final one threatening their lives.

“Passions in Paris” is followed by the official release of the riveting 5-star award-winning romantic fiction drama, ‘Willow’s Walk.’ This page turner was given a 5 star rating by Readers’ Favorite while still in pre-release. Willow Sutherland Crosby is a woman not to be denied her drive to find the perfect love. This search takes her down a most precarious road, one that will leave you reeling in its wake.

In July 2017, Rusty released her second installment in the Derwood comedy series, titled, Derwood Returns. In this hysterical follow-up to The Misadventures of Derwood Tugbottom, the bubbling and pretentious Englishman, known for his staunch outlook and demanding ways, decides to return to the picturesque village of Vinehaven on the Lake, where he takes up residence in the swinging Sunset Villa Retirement Center, located directly across the road from the infamous Anchors Away, of which he hastily departed two years earlier. Now he is back, with a hard-learned lesson beneath his belt, and hopes of finding the life that escaped him on his initial try.

On January 27, 2019, Rusty released the third installment of the Derwood Tugbottom comedy series, titled, Derwood Goes Caribbean. Travel with Derwood, and his best friend, Robbie, as they board The Travelling Minstrel on a swinging single’s cruise to the Caribbean. Christmas 2014 is fast approaching and an intrepid Derwood talks Robert into taking a single’s cruise to the Caribbean with him, which sends them on another eccentric adventure. Will they find what they hope to aboard ship? Will happiness present itself in one the ports of call, or will it avoid them altogether? Find out, in this third Derwood adventure, certain to make you laugh as you cruise right along with him.

Do watch for the fourth installment in the ongoing series, Derwood Comes Home.

Rusty’s third novel, The Perils of Autumn, is a 5-star, multi-award-winning romantic fiction drama set in the early 1970’s at Landon Lawns Stables, a fictional Thoroughbred racing stable in the posh community known as The Meadows, located just outside Lexington Kentucky. This enthralling story centers around heroine Autumn Leeves, a twenty-four-year-old newly graduated RN, who is sent on assignment to Landon Manor to care for the terminally ill wife of English equestrian master, Cyril Landon. However, once there, Autumn encounters a world filled with intrigue, wonderment, and a well kept secret. The Perils of Autumn was released on January 17, 2019 by Tellwell Talent Publishing, and is available in paperback, hardback, and Kindle editions at all Amazons, and in Kobo at Chapters. Paperback, and Hardback editions may also be ordered at all Chapters, Coles and Indigo.

Rusty is currently writing the sequel to the 5-star-multi-awarded, The Perils of Autumn, titled, Return to Autumn, and is expected in fall 2022.

The 5’1″(154.94 cm) spunky redhead is often asked how much of herself is found in her heroines, and she has been noted to say a fair amount, adding that most writer’s inspiration comes from many aspects of life experience, and reaping from them all that one can to use to one’s best advantage, so in that respect she would have to say that many sides, aspects, and flavours of her heroines derive from her own personality and life.

Miss Blackwood now resides in the cultural city of St. Catharines, Ontario and when not at her keyboard, enjoys art, music, nature, gardening, and spending quality time with family, and friends.