You are here: Home / Featured Books / OOF: An Online Outrage Fiesta for the Ages by Strobe Witherspoon 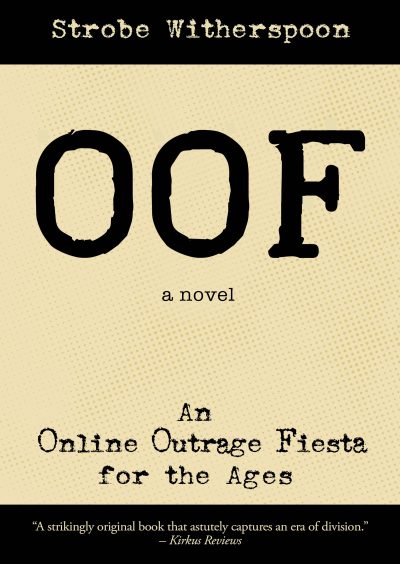 OOF: An Online Outrage Fiesta for the Ages by Strobe Witherspoon

”Strikingly original …an innovative literary experiment that supplies a thoughtful commentary on the ‘discourse virus’ of our age …Witherspoon tackles a broad spectrum of media, including comically scathing excerpts from tweets, podcasts, blogs, and even academic journals and also keenly exposes the ways in which Strobe, the character, is implicated in his own online assault, due to his obsessive attachment to public life.” – Kirkus Reviews

OOF explores the role of satire in a society lurching from one ridiculous crisis to the next, where media outlets rely on clicks to stay alive and everything is filtered through a lens of anger and misinformation.

————
Strobe Witherspoon just sold his latest satirical novel for a lot of money. The book in question, FLOTUS: A Memoir, is a fictitious autobiography about a former first lady of the United States reflecting on years of misery at the hands of her much older POTUS husband. When a chapter is leaked in advance of the book’s publication, an Online Outrage Fiesta (OOF) ensues via news outlets, blogs, Twitter, troll farms, and everything in between. Witherspoon has his life placed under a microscope. Family secrets are exposed. Now, an anthology has been put together to document Witherspoon’s downfall—and settle the score.
————

”an impressive achievement of unflinching honesty from a noteworthy talent, as resonant and relevant as it is entertaining …OOF tugs at the threads that connect American cynicism with radical extremism and weaves a character-rich tapestry of insight …Each voice, whether of a New Yorker journalist or an Internet influencer, is rendered with uncanny fidelity. Perhaps most masterful is that key events are not depicted but merely alluded to, allowing the text to provide an elegant framework for a more personal story painted almost invisibly in the negative space.”– BlueInk Review

Author Bio:
Witherspoon’s first novel, furtl, was a 2014 Kirkus Reviews book of the year selection. The absurd near future of that novel became not-so-absurd one year later.