You are here: Home / Featured Books / Morrel & Morcerf and the Spear of Destiny by Kyle Baxter 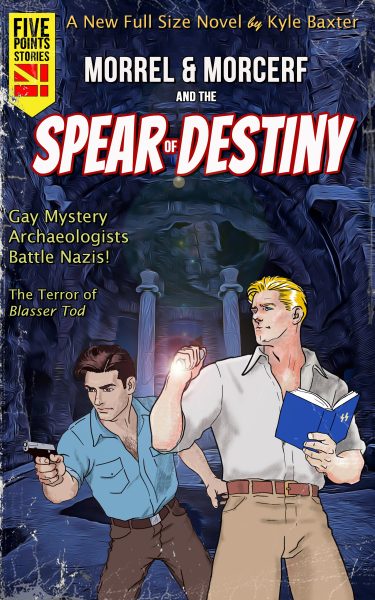 Morrel & Morcerf and the Spear of Destiny by Kyle Baxter

Following the trail to France, the two stumble into far more than they bargained for when a shady auction they’re attending in Paris’s Latin Quarter is raided by Interpol. Alois’s uncle Frederick, from Bring Me Edelweiss, is soon hot on the case along with his lover Joel McIntyre.

After recovering the journal of a Nazi general the four men race across western Europe, chased by fascists desperate to find the treasure for themselves. Gunfights and car chases ensue as the group uses a map in the journal to track down the treasure and its contents, rumored to include the fabled Spear of Destiny.

Can Alois, Marton, and their crew find the treasure before the neo-Nazis do? And why is their every step dogged by mysterious men in black?

Get This LGBT Book.

Born in Hawaii, Kyle is an Army brat and grew up in Erlangen, Germany, as well as Augusta, Georgia, and several cities in Texas. After stints in Louisiana and New York, he resides again in Honolulu with his black Labrador Retriever Brady.