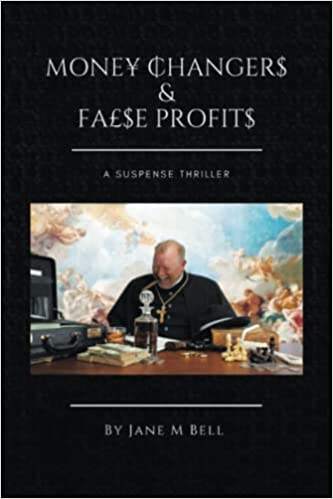 the one thing the detective hated more than anything else was a liar,

especially among his colleagues.

Yet, here he sat,

on the verge of telling the biggest lie he’d ever told in his life.

Lying to the D.A. was, in his mind, a horrible situation.

Dragging his supervisor into this deception was even worse…”

has been keeping tabs on the local mob scene for the last two years.

Francis Clavering, a seasoned detective in “Rackets,” husband and father of

three struggles with his almost obsessive-compulsive work ethic and wanting

to be a better husband and family man.

in a hidden world where religion, faith, diplomacy and politics are intertwined

through a scandalous relationship between the Vatican and her bank, the

American and Italian Mafia and the Propaganda Due (P2) Masons.

Based on true historical events, this story is not short on debauchery, greed,

If you are a fan of the descriptive style of Margaret Atwood, and the mystery and

suspense of a Dan Brown thriller, Money Changers and False Profits delivers all

that while keeping the pages turning. The gut punch right around the middle of the
story showcase author Jane M. Bell’s ability to stir the minds and souls of readers.

the richest, most dangerous global power players to justice? Pick up your paperback

to begin YOUR journey.

I suppose it was inevitable that I finally became a writer. Growing up, I was surrounded by the constant tap tap tap ding of my grandmother’s manual typewriter as she constantly worked on a myriad of writing projects.

I grew up just south of Modesto, California, and graduated from Ceres High School. During my days of study at Modesto Junior College I developed an interest in psychology when I began working in a locked mental facility. In 1988 I began my 20 year career with the Army Reserves where I served as an Armorer, Drill Sergeant, and Combat Medic Instructor.

After earning my AA from Modesto Junior College, I went on to study at Sonoma State University where I earned my BA in Psychology with distinction, and did Post-Graduate studies in Neurobiology. During my post graduate days I worked at the San Francisco VA Medical Center at Ft Miley where I worked in a schizophrenia research lab.

Following my graduate work, I went on to work in the medical field as an Obstetrics Technician at a local hospital.

Today I make my home just outside of Modesto, California with my two sons, daughter two dogs and cat. I still try to find time to serve as a docent at Columbia State Historic Park in the Sierra foothills east of Modesto.
My Work

I find inspiration everywhere, especially in the lesser known chapters of historical events. I feel compelled to bring these interesting, hidden historical gems back to life. Our greatest lessons in life and as a society come from the successes and failures of those who came before us.