You are here: Home / Featured Books / Lioness Unbound: A Memoir of Travel, Adventure, Guts and Grace by Mary Morrison 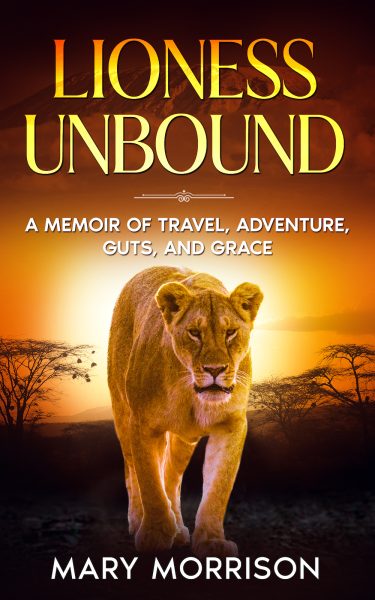 Lioness Unbound: A Memoir of Travel, Adventure, Guts and Grace by Mary Morrison

Mary promised herself a year in Africa to get away from her routine and figure out what had gone wrong with her life. She took various volunteer jobs in hopes of rediscovering her purpose.

She weaves a spellbinding story of failure, fear, and eventual triumph. As she battles her way through nightmarish setbacks, her rugged perseverance becomes a shining example of the strength of the human spirit.

Lioness Unbound follows Looking for the Lioness in the Footloosemary in Africa memoir series, but either can be read as a standalone. If you like vivid descriptions, fighting against the odds, and learning to believe in yourself, then you’ll love Mary Morrison’s epic adventures.

Get This Memoir Book Here

Author Bio:
Mary Morrison has devoured books on adventure and travel from the time she was a mousy-haired, bespectacled teenager haunting the local library in California. She began to wonder, ‘Why not me?’ and found a way to take her first trip around the world at age nineteen.
Hair dye and lasik surgery offered some changes, but she remains addicted to travel stories. Now she is putting her own stories into books and encouraging others to wonder, ‘Why not me?’ She believes that everyone is the hero of their own life story, no matter how far they roam.