You are here: Home / Action & Adventure / Kings of Malibu by Paul Hartford 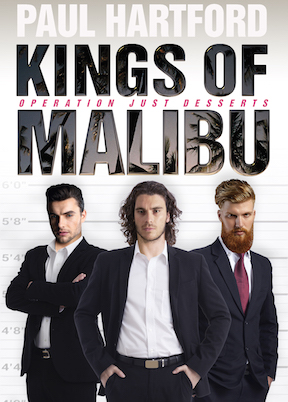 Kings of Malibu by Paul Hartford

What happens when ordinary citizens become criminals for the greater good.

Four righteous restaurant servers cook up a Robin Hood quest to avenge the sins of their despicable and avaricious guests: “Operation Just Desserts.”

In order to become Hollywood’s top Waiter to the Rich and Shameless, Paul “Pauli” Hartford had to abandon his long-haired rocker dude persona and double down on his dedication to five-star servitude. After several turbulent years at the top of his waiting game, Hartford comes clean in this daring confessional, dishing about everything from debauchery to deification at the Beverly Hills hot spot he’s cleverly calling the “Cricket Room” to avoid being sued to hell and back.

Paul Hartford’s work experience includes almost twenty years in the high-profile service industry, catering to topline clients in various exclusive establishments. Before his decade of service in the iconic Cricket Room, he worked in the executive dining room of a major Hollywood movie studio and spent several years as a bartender in an elite downtown nightclub.

As a noted musician and vocalist who has performed in Europe, Asia and America, Hartford has written over 100 songs and has landed musical licensing deals with several feature films and TV shows. Conversely, as a top-tier waiter, Hartford earned a six-figure salary and frequent trips to a therapist.

The “Waiter to the Rich and Shameless” ebook has spent over eighteen months on Amazon’s #1 Best Seller list since it’s release. Hartford has developed a TV pilot based on the book as well as a sequel book, “Kings of Malibu.” He is now hard at work on his second TV Pilot.