You are here: Home / Featured Books / Hard Place by R A Jacobson 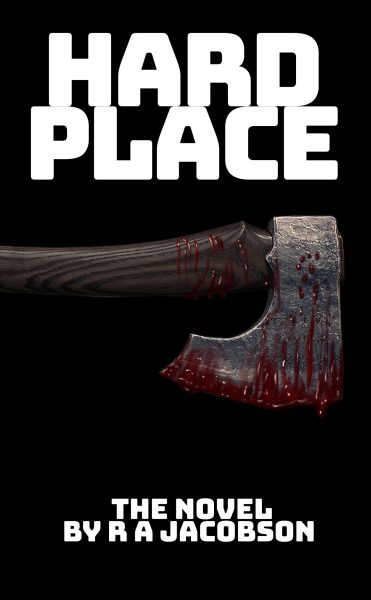 Hard Place by R A Jacobson

“knocked the wind out of me”

“A thrilling and violent tale about how the Devil always wins.”

“A nail-biting hard place to be.”

“It was gripping right from the start.”

A cursed man tricks the Devil with Death’s help.

Demons and deals, motorbikes and taverns, crossroads and consequences. Moonshine and shotguns and two men in love with the same woman 30 years apart.
When your day starts with a close friend stopping by and trying to kill you, you know the rest of your week could only get better. Unfortunately, for Jacob, that’s not the case.
When Mr. White and The Judge meet at the crossroads, Jacob and Matt could lose everything.

Get This Horror Book.

After leaving the north forests and farmland of Saskatchewan, Rick headed to Calgary and the Alberta College of Art. After 4 years of hard work, he came out confused and somewhat lost. Now what?

Rick has been a bouncer (1 week), he has been a radio switcher (1 night) he worked at the CBC (1 month) he was a stuntman (2 action movies that he never saw but he’s not alone in that) he modeled briefly (he was the Jolly Green Giant for a time). Rick has built houses, packed groceries, cut grass, he has written children’s books (4) illustrated children’s books (19). He has worked as an illustrator, a writer, a designer and a painter.

Rick has won awards for his work in advertising and publishing including the Ruth Schwartz Award, the Amelia Frances Howard-Gibbon Award and numerous national and international awards including the Toronto Art Directors’ Awards, Communication Arts Magazine’s Award of Excellence, American Illustration Award of Excellence, and the New York Art Directors’ Award of Excellence. He has been featured in Smithsonian magazine and in The Artist’s Magazine. His commissioned portraits include Margaret Atwood, Robertson Davies, Christopher Ondaatje, and David Thomson.