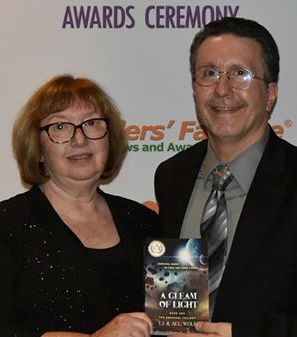 Tell us a little about yourself. Where were you raised? Where do you live now?
We both grew up in smalltown Ohio, less than twenty miles apart. We joined forces in the field of Healthcare, exploring mutual interest in the work of UFO researchers like Budd Hopkins and movie directors like Steven Spielberg. The History Channel's "Ancient Aliens" became a focal point of our quest to uncover the truth regarding humanity's purpose and how it pertains to our future. Married over twenty years, we live in Boardman, Ohio with our six-pound Yorkie, who keeps the family in line.

At what age did you realize your fascination with books? When did you start writing?
Books were an early fascination for both of us…as far back as we can remember. Writing became a serious hobby in High School with introduction to "The Lord of the Rings". But it was really "STAR WARS" that sparked an urge to create and write stories of our own. "Fire in the Sky" opened the door to reality-based storytelling about Alien Life and Human Contact. And so we embarked on a quest to learn as much as possible from researchers like Budd Hopkins, David M. Jacobs, Richard Dolan and Linda Moulten Howe. We found inspiration in Hopi mythology and prophecy — and were fascinated with the concept of the Great Spirit giving specific forms of Guardianship to each of four human races based on skin color: red, yellow, black, and white. It seemed like a great foundation for a Science Fiction Trilogy.

Who are your favorite authors to read? What is your favorite genre to read. Who Inspires you in your writings?
Favorite authors include Ray Bradbury, Michael Crichton, J.R.R. Tolkien, J.K Rowling, and Suzanne Collins. Their works have all translated succesfully to the big screen. Favorite genre: Young Adult Science Fiction. In recent years, the most successful movie franchises, like Harry Potter and Hunger Games, feature Young Adult characters. We find inspiration in true stories told by real people, regarding their Close Encounters with Extraterrestrial Life. We believe that everything happens for a reason. Enlightenment holds the key to understanding … and the survival of Humanity.

Tell us a little about your latest book?
THE SURVIVAL TRILOGY explores our connection to Alien Life through Mythology, the truth regarding humanity's purpose, and how it pertains to our future. Book 1 A GLEAM OF LIGHT explores Native American mythology and its connection to Ancient Aliens in Hopiland. A desperate plea for help calls Una Waters away from her D.C. government job to help solve a Mystery when the U.S. Army invades the Sacred Peaks. Book 2 THE DRAGON'S GLARE finds Una on Special Assignment to Chinatown, New York City … when unexplained acts of violence include a cyber-breach at the NYPD. Her own episode of "Missing Time" leads Una to an Out-Of-This-World encounter that confirms her childhood beliefs in Sky People. Book 3 BEYOND THE WORLD follows Una's "honeymoon adventure" in Yosemite National Park, where a UFO Mystery, strange Otherworldly campsites and Living Pterosaurs all point to an Alien Conspiracy. Diversity lives and breathes through many of our characters … and we believe it is the Key to fighting Racism. Writing began in 2016 with each book taking about one year to complete.