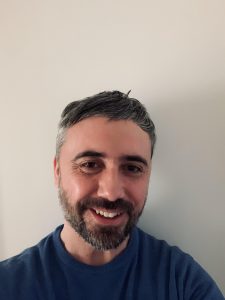 Tell us a little about yourself. Where were you raised? Where do you live now?
I was born and raised in a small city named Limerick. In the '80s and '90s, the city had a bad reputation for crime and violence and adapted the tag, 'stab city'. Today the city is brimming with culture, sports and a world-renowned university. Would I say it influenced the city of Rockwood in Sue & Stu – A Diary of Two? Absolutely! Much like Rockwood, my hometown is alive with characters and lineage, and no matter how much slack the city gets, really, I don't think there is anywhere quite like it. It has charm, it has naivety, but more importantly, it always seems to be one step ahead of you, be it street-smarts, wit or genuine hospitality.

At what age did you realize your fascination with books? When did you start writing?
One of the first books I remember having as a kid was a photo book about the Falklands War. It didn't have much text, mainly pictures of warships and soldiers. The only thing that caught my attention was the soldiers' wives waving their loved ones off. From there, it was on to a very small school library filled with Roald Dahl, Enid Blyton and of course the irreplaceable, Sue Townsend. Fast forward many years and that craving for escapism, relatable characters and a great story sit on top of my many vested interests.

In regards to writing, it was a college assignment, where you were asked to write a 15-minute radio drama that set the light bulb off. The whole thing came thick and fast and I found myself loving every minute of it. To be honest, the whole process felt very natural and didn't require too much planning. Whether it was any good or not is, of course, debatable, but I did keep that same formula – 'the best plan is no plan' and allowed the characters and the story to write itself, much like this debut, Sue & Stu – A Diary of Two.

Who are your favorite authors to read? What is your favorite genre to read. Who Inspires you in your writings?
I love authors who can get two jokes into a sentence. They are rare but they exist and on top of that list is again, the truly inspirational (and I have no qualms in saying that) Sue Townsend. I'm also a huge fan of on-screen writers like Mike Judge and Larry David. Judge's 'King of the Hill' is a cut above its contemporaries (The Simpsons, Family Guy, etc..) but never seems to get the recognition it deserves.

Tell us a little about your latest book?
Sue (Suzanne Conway) and Stu (Stuart Jackson) live in the small city of Rockwood. They have never met, nor do they know of each other. Sue manages a hair salon and spends her days styling the 'who’s who', while Stu manages a record store and typically deals with the 'who’s not'. Though they’ve never met, Sue & Stu do share a common trait, they both keep a diary. A brief encounter between the two sends Stu on a search to find the mystery woman he believes is destined to become his future wife.

Unbeknown to Stu, Sue is busy attempting to be her perfect self. She wants to find the man of her dreams, she wants to settle down, and while she may not admit it to herself or her friends, she’s broody as hell for a baby. Sadly, she’s not having much luck. All her encounters with men have been disastrous. Her mother is in her ear day-in and day-out and she is fearful of spending the rest of her life with her cat, Mr Snuggles.

In a bizarre happenstance, Sue & Stu become an item. Now, their daily diary rants are on each other, not just obscure and Sue’s mother. Can Stu, the epitome of the ‘man child’ navigate what’s to come? Or will his more recent past catch up to wreak havoc? And what about Sue? Is she ready to embrace this whirlwind situation? Is she capable of coping with Stu’s antics or is she on course for another doomed relationship?

The book took about 8 months to write. I could be wrong as there were times where I was doing sfa. But yeah, I reckon in or around that amount of time. I would only write from Monday to Friday and kept the weekends free to process what I had and where I wanted to go. My writing routine consisted of arriving to work an hour early, making coffee, and sitting on a big green couch hammering out as much as I could before starting work (of course, I also kept a copious amount of notes and ideas that I could turn into jokes and scenes).