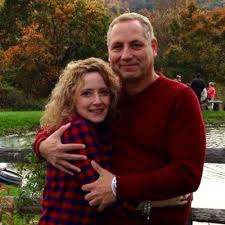 Tell us a little about yourself. Where were you raised? Where do you live now?
Stephanie is an award-winning writer, director, and producer. She has a Master of Arts in counseling psychology, was formerly a practicing psychotherapist, and director of a women’s work release facility. She currently is a professor of psychology at two Connecticut colleges. The field serves as a big part of her creative endeavors.

Stephanie also is a journalist, writer, editor, and with her husband, Wayne, has penned countless works for film, theatre, TV and the literary world. Together they have created a production company, Someday Productions LLC and a highly successful “He Said/She Said” blog called Pillow Talking which may be found at www.somedayprods.com/talking. Most importantly, they have seven beautiful children between them.

Wayne is an Emmy award-winning writer, director, and producer. He is an attorney with a LLM from NYU. He teaches filmmaking and communications at Western Connecticut State University, and has taught at Fordham University, Audrey Cohen College, Baruch College, and Bronx Community College. He has created many programs and documentaries that have appeared on television, and have been distributed to schools, libraries, and home video. He is a published author of the novel titled Mahogany Row. He is married to Stephanie C. Lyons-Keeley, his writing partner and muse.

At what age did you realize your fascination with books? When did you start writing?
We both realized at very young ages that we loved books and both of us started our writing careers very early in our academic careers.

Who are your favorite authors to read? What is your favorite genre to read. Who Inspires you in your writings?
This is a tough one. We enjoy a wide diversity when it comes to authors and literature — from the classics to the hot new bestsellers. Stephanie enjoys J.K. Rowling, Stephenie Meyer, Liane Moriarty, Toni Morrison, A.J. Finn and many more. Wayne enjoys Stephen King, Joe Hill, Agatha Christie, Dean Koontz, Robert Frost and countless others.

Tell us a little about your latest book?
Going All In is a modern day morality tale that uses the game of poker as a metaphor for the game of life. We wanted to show that there are actions and consequences and, sometimes, if we do not think things through, they can come crashing together in unexpected and even deadly ways. What better way to show this then via sex, lies and poker?

The overview of the book describes the plot in more detail.

Three mismatched suburban couples, Steve and Katie, Marty and Erin, and Scarlett and C. Thomas, have been neighbors and friends for years. During a pummeling Connecticut Nor’Easter, the members of the bored triptych engage in a friendly game of Texas Hold’em in front of a fire and over more than a few bottles of Merlot. The impromptu get-together eventually leads to the institution of alcohol-driven, bi-weekly poker nights.

One evening on a lark, someone suggests an alternate payout – instead of pocket change, the winner may choose a player (other than his or her spouse) with whom to spend the night. The proposition takes shape, but complications arise as these things will.

All too quickly, friendships are strained and relationships begin to crumble. Lies are told, truths are exposed, and feelings are hurt. In the end, can anyone bear the weight of this wanton self-indulgence? They are six fully consenting adults, and after all, it’s only a game. Or is it?