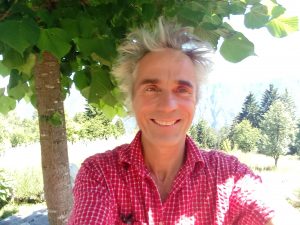 Tell us a little about yourself. Where were you raised? Where do you live now?
I was born in a small village in Slovenia. After high school, I was a student at the University of Ljubljana where I graduate back in 1980 in geodesy engineering. I was attending lectures on physics, psychology, and philosophy. My big interest at that time (and still is) was Einstein Relativity Theory. I'm working on the development of Einstein Relativity for 35 years and got good results. I published several articles on the subject, most important are in Foundations of Physics, Foundations of Science, Scientific Reports – Nature. Recently I published the book "Relativity Reborn – Based on Bijective Physics" at Amazon.

At what age did you realize your fascination with books? When did you start writing?
The first book I wrote when I was 32 years old, the title was "The End of Time". Recently I published a book in the Italian language: La fisica del attimo presente". Together with my colleague research fellow Davide Discaletti we published a book at NOVA with the title "The Brief History of Eternity".

Who are your favorite authors to read? What is your favorite genre to read. Who Inspires you in your writings?
I read most scientific articles. I read the book of Hawking "The Brief History of Time" and I was disappointed. He did not say anything new. More than that, some of the statement in his book are wrong. For example, he used to say that the energy of matter is positive and energy of space (gravitational energy) is negative. In the Big Bang, these two energies are multiplying as 1 + (1) = 0, 2 + (-2) =0 and so on. This makes no sense, you cannot apply math in order to explain apperance of the energy in the universe.

Tell us a little about your latest book?
In my latest book "Relativity Reborn – Based on Bijective Physics" I develop Relativity Theory. The model of space-time is replaced by the model of the multidimensional vacuum where time has only the mathematical existence.
I developed Einstein formula E = mc2 which is the mathematical expression of Einstein’s “mass-energy equivalence principle”. This formula means that mass can be transformed into energy and vice versa. For example, we accelerate your body close to light speed. The mass of your body will be transformed into electromagnetic energy (light). The sensible question is from where originate your mass m and your energy E . Because of Einstein false idea, that universal space is “empty” deprived of all physical properties, physics for more than 100 years did not find the answer. Today we know that space is the primordial energy of the universe, we call it “vacuum”. Imagine you are placed in interstellar space far away from stellar objects. The density of space far away from stellar objects is at the maximum. You will diminish density of the space on your body surface exactly for the amount of your mass and energy, which is expressed as:
E/c2 = m = (Pmax – Pmin) x V

I developed Einstein’s Relativity in so-called “Dynamic Vacuum Relativity”. I developed a cosmological model called “Bio-Universe Model” where universe is a system in dynamic permanent equilibrium and evolution of life is the consistent part of cosmic evolution.