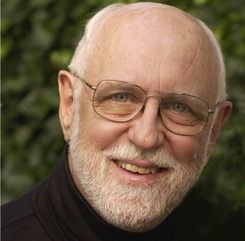 Featured Interview With Roger B. Burt

Tell us a little about yourself. Where were you raised? Where do you live now?
I was born at home in Queens, New York. I was my mother’s third pregnancy but apparently I wasn’t ready to come so I hung out with her until I was ready. Then I came so fast she didn’t have time to get to a hospital. My father delivered me. Fortunately he was a surgeon.

As an infant I was clearly a night person and my mother walked me on the streets of New York in the very early morning hour. It was just before World War II and the neighborhood was quiet and accepting.

From the beginning I wasn’t interested in “reality” or the ordinary. My earliest memory is of being in a window seat on a dark night watching flashes of light from the rain during the world war blackout.

From my youngest years my two aunts took me out to see New York whether it was the Empire State Building or Times Square on New Years Eve until near dawn.

As a family we toured Europe just after the war ended. To put it mildly, it was mind opening and stirred my imagination. I recall seeing great fear remaining on the faces of the people of Europe.

The new and the imaginative was what interested me. My brother went to college at Princeton. I wanted to see more of the country and went to college in Michigan. Then it was on to graduate school in North Carolina during the frightening years of the civill rights movement. I did what I was supposed to and gained my doctorate in clinical psychology at Duke University but got into the depth of understanding of prejudice and conflict In that difficult era.

I then couldn’t just walk away to peace and went to work in the impoverished inner city of Baltimore. It meant I had to learn about working on the streets, entering slum housing and climbing through the drug ridden high rise projects. The people I worked with were touching and left me deeply committed.

I had married in college but after our second child was born our marriage came apart. She left and our two daughters remained with me. A close friend was also getting a divorce. We had always shared similar interests and after our divorces were finished we married. She brought two sons and we learned about stepfamily conflict and distress. Becoming national experts and publishing books on the subject helped us put it all together. Our children are now grown, we have grandchildren and we are still happily together after 44 years.

Throughout my life I desired challenge and novelty. While challenge was often difficult, in the end it was fulfilling.

For much of my later life our family lived in our own little valley in northern Maryland in a two hundred year old stone house on a lovely little river. More recently my wife and I moved to Maryland’s Eastern Shore where we have found new challenges along with continued peace, love and tranquility.

Oh yes. Pets. In northern Maryland we acquired cats and dogs and other informal wild pets. Some were animals we sought to take in, others were strays who enhanced our lives. One day I returned home and found an exhausted dog lying on the porch. I knelt down to pet her and asked, “And what’s your name?” She managed to lift her head, looked me in the eye and said, “woof!”. That became her name and she stayed with us as a darling loyal companion until her death many years later.

My life has been a varied existence and I chose to seek new ways through it. These last decades in America have been a wonderful but difficult adventure.

At what age did you realize your fascination with books? When did you start writing?
The first book that fascinated me was Ferdinand the Bull which my perceptive mother brought home to read to me when I was very young. Yes, Ferdinand was a bull but a gentle one. He loved to smell the flowers which meant to me that he loved precious things that were stimulating. Of course at that young age I could not know what that actually said about me.
While it did not include some of the forms of challenge I have experienced, it told of my interest in beauty and wonder.

But what I found was that one kind of book did not focus me. I have always moved through vastly different kinds of books. Whether they fire my senses or imagination, it doesn’t matter. There must be novelty and enrichment of feelings, passion or even science. Feelings and depth of discovery is all desirable.

My writing began with some early fiction work but it was crowded out by the demands of family, children, divorce and challenge of all kinds. Writing resumed when I put together real world focused works on service in poverty, and things like divorce and remarriage. Much later I moved to works of fiction.

Who are your favorite authors to read? What is your favorite genre to read. Who Inspires you in your writings?
I cannot state a single focus of my reading whether it is subject or author. I must be intrigued and if there is one thing that is a problem, it is that my interests can be pulled in very many directions. Again I come back to imagination, novelty and challenge. Inspiration can come from many and diverse sources whether in the real world or fiction. And then, too, there is the possibility of melding real world challenges with fiction

Tell us a little about your latest book?
Currently I am working on the third book in my Gaia’s Majesty Trilogy, Gaia’s Majesty-Transformation: Life Forces Revealed. It is a series that has grown out of my real world experience but had to be portrayed in books that reflect the melding of both fictional and real world themes.

Back in the 1960s I was thoroughly engaged by the stirrings of the empowerment of women and I have also been captured by the study of the movements in our world at large. I see us now as entering a period where transformation lies at the thresholds of our lives. The form of transformation into which we may descend and its outcome are never clear. We seem close to a descent into another period of intense and horrifying conflict in the world at large or rising about it all into a new age of promise. We may find women rise to lead us as our world enters into a new age or we may descend into another era of chaos. These two themes are blended in my Gaia’s Majesty series.