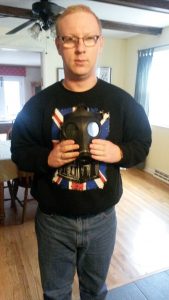 Tell us a little about yourself. Where were you raised? Where do you live now?
I’m a novelist from Columbus, Ohio who specializes in horror, science fiction, and thriller. I’ve lived in Ohio most of my life, and I’ll probably die here, at which point I’ll probably become a ghost and go to all the places that were too expensive for me to visit in life. In the meantime, when I’m not at the office, communing with Cthulhu, or making my father’s hairs go gray, I’m working on l sorts of strange and macabre stories. Someday I hope to write for Doctor Who and go ghost hunting with the Ghost Adventures Crew. For now though, I’m fine just spinning tales and hearing from people whom I gave nightmares to.

At what age did you realize your fascination with books? When did you start writing?
I can’t remember an age where I wasn’t enjoying a book or two. It wasn’t until I read Harry Potter (or saw the movie, I can’t remember which came first) that I wanted to create worlds. In fact, the first novel I ever tried to write was a version of Harry Potter with a female protagonist and a cat who could turn human. When I was ten, I decided to pursue writing as a profession. And when I was eleven or twelve, I discovered Anne Rice and Stephen King, and I figured out I wanted to write scary stories. I’ve been writing and scaring people ever since.

Who are your favorite authors to read? What is your favorite genre to read. Who Inspires you in your writings?
I love Stephen King and Anne Rice. They’re my biggest influences, no doubt about it. And as you can tell by my previous answer, JK Rowling got me into writing, so there’s a bit of her in my stories as well. When it comes to serial killers, you can definitely see a bit of an influence from James Patterson’s Alex Cross novels. Those are the major ones, though I tend to think every author has something to teach, as well as something you can take and make your own.

Tell us a little about your latest book?
Video Rage is the sequel to my first novel, Reborn City, and the second book in a trilogy I’ve been working on since high school. The series follows a street gang called the Hydras whose leaders have strange abilities and powers, and that’s somehow wrapped up with a conspiracy involving the top brass of Reborn City. The series has lot of parallels to today’s world, even though it’s science-fiction taking place about forty years ahead of us: for example, Islamophobia is a major issue in the series, and increasingly it’s major issue in today’s world. Violence and prejudice also come up a lot, as does drug addiction. The major theme of the story, however, is overcoming what you think of yourself and what others think of you. I explore that theme a lot in the books, and my hope is that that theme really resonates with readers.