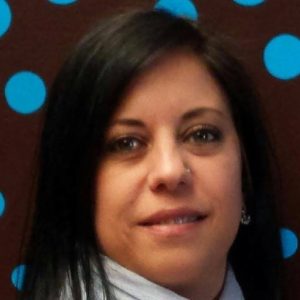 Tell us a little about yourself. Where were you raised? Where do you live now?
I was raised in a rural community in Northern Illinois where I spent many days exploring forests, climbing trees and imagining wonderful stories. I have worked as a secretary, Certified Nursing Assistant, Retail Manager and finally, I am a full-time writer. I am married to my best friend and high school sweetheart for nearly twenty-two years, though we have been together for over thirty-two years. We have three grown children and four granddaughters and currently reside less than 30 miles from where I grew up. I have two cats, Bailey Reginald and Chester Obadiah and two parakeets, Georg and Liesl.

I have a Bachelors of Business Management from the University of Phoenix and a Masters of Fine Arts in Creative Writing from Fairleigh Dickinson University.

At what age did you realize your fascination with books? When did you start writing?
I think I've always been fascinated with writing. I remember scribbling on a paper and begging my mother to tell me what it said. I love the idea of writing, of having something to say on paper. I've always had an active imagination and have always wanted to write. I really started serious writing around the age of nine. I wrote a story about three girls who have a horse farm and their prize stallion and colt are stolen by their rival. I finished it when I was fourteen. I've never done anything with it, but I still have it and every now and then I take it out and cringe at it and then stick it back in the drawer. One day, perhaps, I'll have the courage to edit it. Currently, I am working on a novel I hope to complete this year and have several more stories i the wings still begging to be written.

Who are your favorite authors to read? What is your favorite genre to read. Who Inspires you in your writings?
I have many favorites, Charles Dickens, Margaret Mitchell, Leon Uris, Amy Bloom, Thomas E. Kennedy, just to name a few, but I would have to say, Dickens is my all time favorite. I fell in love with Tale of Two Cities when I first read it at the age of fourteen. I have read it countless times since, as well as Great Expectations, Oliver Twist, Pickwick Papers, David Copperfield, all of them. I love how Dickens creates, how he develops these amazing characters, each one uniquely different than the last and so rich with complexity. And the settings, so colorful and tragic all at the same time, I feel as though I am right there, on the dirty streets of Victorian London, smelling the cook fires and the stinky Thames and listening to the clomping of the horses as they pull squeaky carriages behind them.

I love Historical Fiction. I love reading about history and people who were there, experiencing it as it happened. I think that's why I love Uris. He wrote about things that were recent or happening as he was writing, yet to me, it's historical and it's fascinating. I remember I read The Hiding Place when I was six and my parents didn't believe I had actually read it, so I read them a chapter each night. I have always been drawn to history and love studying it even when I"m not writing. Of course, History was my favorite and easiest subject in school.

I would have to say, everyone I have ever read in one way or another. I can't say it's one more than the other. Each writer has their own style, their own unique way of looking at the world and it comes through in their writing. I read and I learn what works for me and what doesn't. So, I can't really say it is one particular one.

Tell us a little about your latest book?
Delia is a departure from my usual work. The story was inspired by a writing prompt in a group I'm a part of and it developed from there, quite by surprise to me. She is a contemporary woman, who learns her mother has passed and her father needs her. Reluctantly she goes back to her childhood home to be the dutiful daughter when it's the last thing she wants to do. Charlotte, Delia's mother, was a distant, often, cold woman who Delia wanted to love, yet was kept at arm's length. Greyson, her father, is a harsh, demanding and unforgiving man whom Delia has learned to both fear and loathe. Now, she is confronted with the task of trying to bury Charlotte and somehow take care of a rapidly aging Greyson when the only thing she wants to do is run back to New York and forget all about them. Unfortunately for her, a former fling from high school, Cody Travis, stands in her way and he is determined to make her learn the truth about Charlotte's past.

I would have to say, Delia was an adventure to write. From start to finish, it took me a total of four months. I was surprised where the story took me as it was not planned out. Each character came alive and showed me what they had to say. I actually wrote more than half of it in one day. Or course, there was editing and revising, but overall the actual story itself took only a few weeks. I thought once Delia was written, that would be all of it, but lately, Charlotte and Greyson as well as Cody have been tapping on my shoulders, so yeah, the story will continue. I'm excited to experience the rest of the story, too.