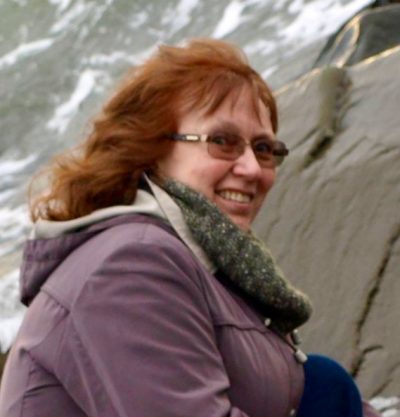 Tell us a little about yourself. Where were you raised? Where do you live now?
I was born and raised in Moose Jaw, Saskatchewan. As an adult, I've lived all over — from small towns like Wynyard and Meadow Lake, SK, to bigger cities like Toronto, Edmonton, Calgary, even New York City for six months — and now I live in Regina, about 65 km east of my hometown, on Treaty 4 Territory. I share my home with a 6-pound calico cat (or should I say, she shares it with me?)

At what age did you realize your fascination with books? When did you start writing?
I was lucky that my Dad read to me every night, as far back as I can remember, so my fascination with books and reading began early. I wrote my first story when I was 6 years old, but I was 46 before I had a short story published. I always wrote, though. One of my university degrees is in journalism, so I worked at weekly and daily newspapers, and later freelanced for magazines, CBC, and online markets. And now, I'm the author of more than 40 published children's books and YA novels, as well as short stories and poetry.

Who are your favorite authors to read? What is your favorite genre to read. Who Inspires you in your writings?
I have so many favourite books and authors! I read a sprinkling of everything, but mostly fantasy. Everything from the classics like T.H. White’s Once and Future King and Edgar Allan Poe to modern favourites like George R.R. Martin, Cassandra Clare, Jim Butcher, Leigh Bardugo, Robin Hobb. So many! I read about 50 books a year for pleasure, over and above the research I do.

Tell us a little about your latest book?
My latest books are a medieval fantasy series called Last of the Gifted: Spirit Sight (Book 1) and Water Sight (Book 2). It's set in 13th Century Wales. Two siblings pledge their magical abilities to protect their people from the invading English, with a little help from the last true Prince of Wales—after his murder. In Spirit Sight, Hyw is a young warrior-in-training who can control the minds of birds and animals. When he sees the prince murdered, Hyw's gift allows him to bond with the prince's soul to gain his help in surviving the ruthless invasion. His sister Catrin can see the future in a drop of water, and Water Sight carries the story forward as the Welsh are driven back into the far reaches of North Wales. Finally, with her brother trapped in his evolving magic and her betrothed in an English prison, she is faced with an impossible decision: save her brother, or save the ones she loves. The series combines magic, mythology, and legends with the historical realities of 13th Century Wales.
(Represented by Mickey Mikkelson, Creative Edge Publicity)