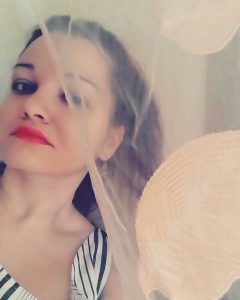 Tell us a little about yourself. Where were you raised? Where do you live now?
I was born in 1988 in Korinthos, Greece, my mother's hometown. Soon after, though, my family moved to Lefkada where I grew up until 2006, when I relocated to Athens for my studies. I've been living and working in Athens for the past 13 years, but I try to visit Lefkada as often as I can. Catching up with my childhood friends and have a good laugh is a must. I'm nostalgic.

Three years ago, a dog knocked on my parents' door. He was badly beaten and kept hiding behind the car whenever we tried to get close. Slowly, we earned his trust, and now he is a healthy -if not easily scared- pet. We call him Phivo!

At what age did you realize your fascination with books? When did you start writing?
My dad is a teacher, so he urged my sister and I to read from a young age. I didn't start writing full stories until my teen years though. Professionally, I started writing in 2011, and it got serious in 2013 when I got my Diploma in Scriptwriting for TV, Film, Stage, Radio.

Who are your favorite authors to read? What is your favorite genre to read. Who Inspires you in your writings?
My favourite author is Tolkien! I'll never get tired of praising his work. Leigh Bardugo's work is pretty awesome, too. When I was younger, I only read fantasy and mystery books. Nowadays, apart from reading Lord of the Rings once a year, I also enjoy contemporary romance and science fiction.

Tell us a little about your latest book?
My latest book, "Don't Let Go", is a contemporary romance set in Boston. It was published on April 23rd, 2019, by Limitless Publishing. It deals with cancer, surviving, and how sickness affects relationships. The main characters are Katie (24 years old) and James (29 years old). It has a bittersweet happily ever after, if you are wondering.

The natural order of life is for children to bury their parents so Sean doesn’t take it very well when he learns he has to watch his precious daughter fade slowly. But you can only push someone you love so much without pushing them away at the same time. And Katie is fierce and independent and not used to being taken care of, so when she snaps it’s only natural. While trying not to succumb to her fears, she meets a young man who tries with everything he has to teach her what it means to live by yourself but be able to let others into your heart too. James knows how to handle that very well after having lost his own family.

Katie wants to love him back with all her being, she needs him to show her how it feels like to belong, how it feels like to breathe. She knows that it will only be for a few more months but James makes her think that it will be forever and that scares her. Her biggest fear except for dying is letting people down. James is young, he needs to have fun and to live his life, but he can’t do that with her and her cancer shadowing his every step. She chooses to leave him, saying a goodbye which only makes him wonder what he did wrong. No one knows where she is going or for how long, but that doesn’t matter. What matters is that she chose to leave him; that she didn’t trust him enough to understand that whatever life he wanted to live was only by her side.

James spends months away from friends and work, trying to make his body hurt less but all he manages to do is slip into depression, unanswered questions driving him mad. His wake up call comes to the form of his sister, the only family he has left, and for her he tries to cope and move on. He even meets a new girl and he tries to make it work but after only seconds he realizes that this is not what he wants. He only wants Katie, with her sad smiles, her always absent mind and the heart of ice that only he has been able to melt even for a little while.
And just like that she’s back into his life and he knows that if he lets her go again, this time it will be on him.