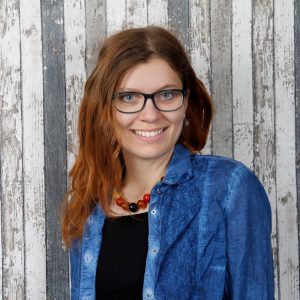 Tell us a little about yourself. Where were you raised? Where do you live now?
Hi. I'm Julia. I'm 31 years old and live in Leipzig, Germany. I was born and raised in a small village about an hour from cologne. I moved out to study when I was 19, did my Master's in Edinburgh and left part of my heart there, which I now re-visit regularly, and then lived in Berlin for five years before moving here. I don't have any pets, but I have seven instruments and can play all of them. My debut novel combines my climate-catastrophe panic with my eternal love for music.

At what age did you realize your fascination with books? When did you start writing?
I started writing when I was about eight years old but my fascination with books started way earlier. My parents had to go to work quite early and brought me to my granny before they headed there, so I was programmed to wake up at 6 am. As they preferred to sleep a little longer on the weekends, they put picture books in my bed which kept me entertained for a while. I wrote my first fantasy novel – it was high fantasy and from today's viewpoint super-cringeworthy – when I was 14 and had a few friends at school who demanded a new chapter every day. After school I studied biotechnology and ended up writing a ton of fanfiction in several different fandoms (no, I am not telling you my fanfiction pen name), which was how I started to write in English rather than German. When I started to write "Prodigy" I considered whether writing in my mother tongue wouldn't be easier, but as I haven't written any stories in German in the last decade, English was actually easier.

Who are your favorite authors to read? What is your favorite genre to read. Who Inspires you in your writings?
I absolutely love, love, love Maggie Stiefvater and V. E. Schwab and I will buy and read anything they publish. I am in awe of their storytelling-abilities and also admire them as people. I also absolutely adore anything from Terry Pratchett and I will always remain a massive Potterhead (even though I am not a big fan of J. K. Rowling as a person any more). I read a plethora of genres, but I guess the biggest portion has some kind of speculative element to them. But I also like historical fiction. I lately fell down the "Poldark" rabbithole and might not come back from it any time soon. And I love the classics. I am a Janeite ("Persuasion" ftw!) and kind of geeked out when I went to Bath with my mum last year. Some of the latest reads which I either just finished or am still reading are: "Tarnished are the Stars" by Rosiee Thor, "Red, White, and Royal Blue" by Casey McQuiston, "Circe" by Madeline Miller, "The Shipping News" by Annie Proulx, "Vienna Nocturne" by Vivien Shotwell and Bruce Springsteen's autobiography "Born to Run". I also have two fiction books about Elizabeth the First on my TBR pile currently, because I did a presentation on her and was extremely intrigued by all the things I discovered in my research (e.g. the fact that she usually uses full names and titles even in the letters to her potential marriage candidates, but then addresses her letters to Robert Dudley simply as "Dear Rob" is just endearing). I have zero self-control when it comes to books and I usually read several in parallel.

Tell us a little about your latest book?
"Prodigy" is my debut novel. It's a dystopian sci-fi story set in Berlin – or "City 5" – 250 years from now. The climate catastrophe has already happened and the few cities that still remain are covered by artificial atmosphere domes. People pay for their luxuries with Productivity Points. If you don't adhere to the system, you can end up as a Pointless in the underworld. Here, a guy named Adam watches over a group of young thieves. One of them, 17-year-old Robyn steals prodigy Akira Sato's violin which leads to both girls having to re-evaluate their life choices.

The story is extremely character driven. Akira and Robyn are extremely different. They have totally different backgrounds. On one hand you have the street urchin, who always had to fight for her own survival and who has never even considered she might get a chance to be more than what she is. On the other hand, you have Akira who is extremely wealthy and privileged but also extremely lonely. Robyn had an affectionate found family for almost her entire life, while Akira's father seems completely unable to love her. So in a way neither of them is purely rich or purely poor.

They also have completely different relationships to music. Robyn was brought up to love music and it truly speaks to her heart. For Akira it's a cage. Robyn is a lot like me in this regard, but for Akira, I used some interviews with prodigy musicians, where they talked about what their childhood was like, and worked from there. They both go through an immense amount of personal growth in this story.

I started working on "Prodigy" in spring 2019. The idea came to me after a friend sent me an article about a stolen violin. This was right before Camp Nanowrimo and I used the month of April to get the very first draft down on paper.