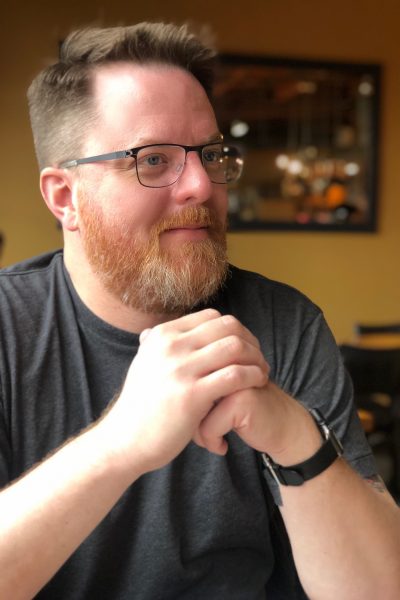 Tell us a little about yourself. Where were you raised? Where do you live now?
I'm originally from a small, beef-centric town in northeastern Colorado called Greeley. Perhaps you've smelled it. Perhaps you've heard comedians make fun of its smell. How bad does it smell? Bad enough that I joined the Marine Corps to get away from the stench in the hopes of seeing the world. And boy did I see the world. If you define the world as a scalene triangle between San Diego, CA, Millington, TN, and Yuma, AZ. Little did I know that Catch-22 by Joseph Heller was a hard-hitting documentary and not a piece of fiction.

But that was a long time ago when I wore a skinnier man's pants. Since then I have been a waiter, bartender, plumber, tech support agent, and then spent almost a decade and a half in the optical field (eyeglasses not death-rays). All the while writing in the background.

At what age did you realize your fascination with books? When did you start writing?
My fascination with books is mostly John Madden's fault. You see, my father and mother had a deal that I didn't know about until I was much older. On Sundays, my father would sit down in his comfy chair, turn the football game on, and promptly fall asleep. While the game was on, he didn't have any chores to do. Once the game ended, things needed to get done around the house. My friends all watched football and I wanted to seem like I knew about football. So, I'd sit on the floor, not realizing my dad was asleep, and constantly ask him questions. After about the third question he would say, "Don't you have a book report to do?" And I would leave to find my book and he would get to finish his nap. Now every time I hear John Madden's voice I instinctively reach for the book I'm reading. Which is how I've read, on average, a book a week since I was ten.

Speaking of my father. My father has an attitude that I call "A Fella Oughta Be Able To." Whenever there was a problem or something broken or a difficult task, my dad would say, "Well a fella oughta be able to…" and then he'd detail the device he was going to build to fix the problem. Being raised around that attitude in a house full of readers — a la peanut butter and jelly sandwiches — I eventually looked at a book and thought, "Well a fella oughta be able to write one of these here books." This is why I started writing my first book in the seventh grade. It was a mash-up of the Teenage Mutant Ninja Turtles and The Punisher, but not in a very good or grammatically correct way.

Who are your favorite authors to read? What is your favorite genre to read. Who Inspires you in your writings?
When I was a kid I was obsessed with Edgar Allan Poe, Arthur Conan Doyle, and Fred Saberhagen (The Books of Swords specifically). When I got older it was Monty Python, Douglas Adams, Terry Pratchett, and Hunter S. Thompson. Then it was Chuck Palahniuk, Anthony Bourdain, and Philip K. Dick. My wife will mock me if I don't admit that I also "stan" Alton Brown and I will read a cookbook like a novel.

I gravitate to science fiction, but I will read almost anything that sounds interesting. If you go to my Goodreads page I have 150-200 books on my "own but haven't read yet" shelf. I have a problem with used bookstores. Namely, I'm obsessed with keeping all of them in business single-handedly.

I learned a lot from Chuck Palahniuk's online writing course ten or fifteen years ago, but everyone inspires me. I want to write a minimalistic (Palahniuk) travelogue (Bourdain) that is absurd (Monty Python) and satirical (Pratchett) and really puts the screws to the greed-heads running this country into the ground (HST) that makes the reader question their sanity and if they are human at all (PKD) with a joke about the Maillard Reaction (Brown) for those that are really paying attention.

Tell us a little about your latest book?
This is going to start out weird but bear with me. After 9/11 there was a period where the President (Dick Cheney) was saying, "Either you agree with me 100% or you're a terrorist." Everyone was also putting yellow ribbon magnets on their cars and questioning your patriotism if you didn't have one on your car. It seemed like a very surreal commercialized authoritarian takeover. If some brand didn't mention their patriotism they were clearly terrorists. And there was the "Freedom Fries" thing. Even though "french" is the cut of the potatoes not the country of origin people were trying to outlaw the word "french fries." So, I took all of that and dialed everything up 300% thinking that in 200 years this is what America would look like if the "freedom fries" people were left in charge uninterrupted.

So America in my book has a wall along the Canadian and Mexican border. There are travel bans from people coming into the country. To become a citizen you have to convert to Christianity. There's an idiot billionaire in the White House. No one speaks directly to other people for sanitary reasons and you certainly wouldn't touch another individual. Citizens have to prove their patriotism on a daily basis by reciting verses from The Bible and amendments to The Constitution. But just to make it look nothing at all like present-day America, you get anally probed by a machine every time you clock in for work and there are flying cars.

As an aside: I wrote this book over fifteen years ago. It has just recently been published. Timing is the strongest part of my game.