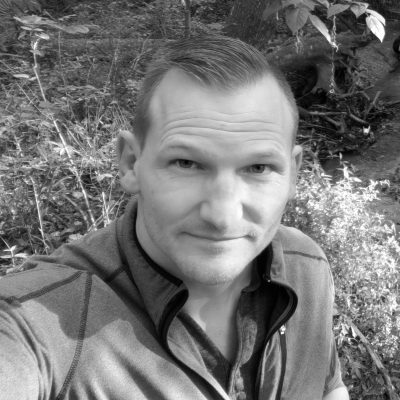 Tell us a little about yourself. Where were you raised? Where do you live now?
I grew up in the mountains of Virginia in the least populated county east of the Mississippi River. My folks made maple syrup products for a living (the elevation gave us the right weather conditions, despite being so far south). Most of my free time was spent getting into mischief in the woods or reading books. Later, I went to college in Texas, spent some time at sea, became a scientist at the University of Minnesota, fought professionally in mixed martial arts and married the girl of my dreams (whose career in the Army has led us to live in eight states and counting).
My love of mischief and books has never waned.

At what age did you realize your fascination with books? When did you start writing?
I started reading at a very young age. I can still remember the first book I read myself (Along Came a Dog by Meindert DeJong). But I think I was about eight years old when I found a big box of paperbacks at the base of my older sister’s bookshelf. It was full of beaten copies of Louis L’Amour westerns, fantasy classics like the Dragonriders of Pern and the Chronicles of Narnia, and these time machine themed “choose-your-own-adventure” style books. It was like stumbling into a new world, and over the summer I read (and eventually, um… “liberated”) almost everything in that box.
I had always had a knack for storytelling, but it wasn’t until I started reading regularly that I knew I wanted to write. The way writing allows you to create a world in your own mind and then implant it into the mind of another person, even a stranger years after you’re gone, is honestly among the coolest things humans have every come up with.

Who are your favorite authors to read? What is your favorite genre to read. Who Inspires you in your writings?
I have pretty wide tastes in genre but have a real soft spot what we think of as “genre fiction”. I love horror, sci-fi, action-adventure, westerns, fantasy, and thrillers of all kinds.
For thrillers, I really enjoy the work of Douglas Preston & Lincoln Child (both separately and as a duo) as well as Jeffrey Deaver, and Stephen Hunter’s gritty heroes are among my favorites. Louis L’Amour is, of course, the king of westerns, but I also love his classic adventure tales, as well as the modern adventures of the late Clive Cussler. For horror, it’s hard to beat Stephen King, Dean Koontz, and the classic works of H.P. Lovecraft. I’m currently trying to get through all of Robert A. Heinlein’s books, mostly on audio.
All these writers inspire me to create new stories, even as they entertain me with their own.

Tell us a little about your latest book?
Shadow of Wolves is a historical horror novel in the tradition of Robert E. Howard’s Weird West
Ruled by a ruthless silver baron, the remote mining outpost of Shank’s Point is under siege by a sinister evil. When disappearances become mangled bodies, John Swift-Runner calls on his old friend, a vagabond gunfighter named Kit Barker, to stand with him against the coming slaughter.
But as their band of misfits hunts for the creature on the burning sands of the Mojave, they stumble into a generations old mystery that goes beyond shamanic curses and into the bloodstained pages of legend.
Shadow of Wolves is available in eBook, paperback, and audio. A new sequel, Hail of Brimstone, is coming in late 2021.