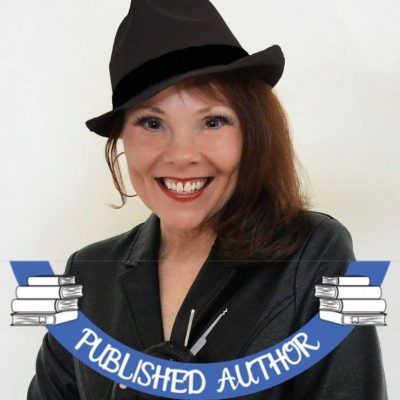 Tell us a little about yourself. Where were you raised? Where do you live now?
I grew up in Michigan and have remained here all my life, attending Western Michigan University for a BA in English. I love the Great Lakes and all of Michigan's phenomenal vacation locations. The third book in my second series – the Thief à la Femme Series – takes place on Mackinac Island–a place I am very familiar with.

I am married to the most fabulous man in the world, Mark Devereaux. We met because we were/are both distance runners, running Cross Country and Track throughout our high school and college years and then moving on to road races (anywhere from 5Ks to Marathons).
We have two adult children. 1). Daughter, 36, who has given us two wonderful grandsons…and a pretty great son-in-law. 2). Son, 33, who married our lovely daughter-in-law. Their one child is our only granddaughter.

I've had pets my whole life–mostly one particularly fabulous mutt the whole time I was growing up. After I married, my husband got us a couple kittens. We got another dog later on, when my daughter asked for one when she was five. Cats, dogs, horses, bunnies… I love all animals. Except snakes and spiders. I don't like snakes or spiders.

As my author picture suggests, I did a lot of research for my two "thief-oriented" book series. As such, I learned to pick locks, pick out of handcuffs (even behind my back), and have some basic skills in pickpocketing. All of the new learned skills were to help me better write the narratives for my books, but I have helped more than a couple friends get back into their houses when they locked themselves out. 😉 Fun stuff, that!

At what age did you realize your fascination with books? When did you start writing?
I've been telling stories my entire life. I didn't actually start writing them down until I had a creative writing class for my English major in college. I didn't get serious about writing a novel until I was in my early thirties, and that's when I wrote my first novel, what is now Prequel One – The Price of Notoriety – in my Requisition For: A Thief Series. I started publishing, beginning with Book 1 – A Diamond for the Taking in the Requisition For: A Thief Series in 2012. When I contracted a professional editor in 2013, I rereleased the first two books I had published and then went on to contract a professional cover design artist in 2016 for my fifth book in the REQThief Series, my first and only series at that time. I republished the first four books with the new covers my CDA made for those books.

In 2018, at the urging of a particular fan who wanted to see a story about a female thief, I started the Thief à la Femme Series with Born to Steal (Thief à la Femme Book 1). I now maintain both series, generally putting out two to three books a year, plus I added two prequels to the REQThief Series: Prequel One – The Price of Notoriety – and Prequel Two – The Inevitable Fate of Notoriety's Children.

My books are all about thieves–thieves who are not really bad guys. REQThief is about a male thief who comes to be working for the United States government–not helping catch other criminals…but stealing for the government. Thief à la Femme follows a female thief right out of college who steals for a matriarchal "Robin Hood" crew and also maintains her own solo thieving career–"stealing from the despicable to serve the deserving…"

Who are your favorite authors to read? What is your favorite genre to read. Who Inspires you in your writings?
I love J.K. Rowling's Harry Potter Series, but I haven't read anything else of hers. I tend toward justice novels, like Lee Child's Jack Reacher and ANYTHING I can find that mirrors (even slightly) my genre of crime-heist…where the thief is actually the protagonist and the hero of the story. Not many of those out there. I also have followed Gretchen Archer's Davis Way Crime Caper Series. I love her humor.

Janet Evanovich had a good thing going with Lee Goldberg with their Fox and O'Hare series (the usual fed working with a con man to catch other crooks), but when Lee Goldberg stepped out, the series failed (at least in my opinion) with the addition of her son as coauthor.

I was originally inspired as a preteen by a TV show that ran in the late 60s–It Takes a Thief–starring Robert Wagner as an international jewel thief who is taken out of prison by a CIA type of organization to steal for them. Neither before nor since have I seen a plotline like this–until I started publishing Requisition For: A Thief. My REQThief series is what I consider a contemporary upgrade to the It Takes a Thief television series.

Tell us a little about your latest book?
I just released Book 4 in my Thief à la Femme Series (April 23, 2021): To Have And To Heist (Thief à la Femme Book 4), what is actually the first book in a three-book Crossover Event between my two series (REQThief and Femme). With nine books in the Requisition For: A Thief Series (plus two Prequels for a total of eleven books in that series) and now four books in the Femme series, I am excited to have reached a total of fifteen books published in both series–and I'm already well into what will be the second part of the Crossover Event and my sixteenth novel with my current WIP (Work In Progress): Requisition For: A Thief <10> Stealing the Stolen. But you want to know about my latest published book, so let me tell you a little bit about the Femme Series. I don't think I have a better description than the back cover synopsis on Book 1:

BEAUTIFUL. INTELLIGENT.
CONSUMMATE PROFESSIONAL.
SHE’S A THIEF …
WITH A HEART FOR JUSTICE.

A recent college graduate, Rayla Rousseau has been leading a double life, the secret one a double scoop of phenomenal that’s given her life extraordinary meaning.

Trained from the time she was seven by her grandmother to become the irrepressible thief she is, Rayla has worked for a secret sisterhood since her thirteenth birthday. In addition, Rayla’s maintained a solo thieving career since she turned eighteen. Now, at twenty-two, she’s a full-fledged high-end thief who steals from the vile, contemptible, and unentitled wealthy, taking down real bad guys and keeping a fair amount of the spoils for her trouble.

Enter drop-dead gorgeous FBI Special Agent Luke Keltry. One hot member of the High-End Theft Unit out of DC—according to Rayla’s refined eye—Luke is also hot on Rayla and the sisterhood’s trails.

Attraction erupting between them, Luke is unaware Rayla is the thief he’s attempting to capture, and he is dangerously close to finding out the truth about her and her secret life. Meanwhile, Rayla could risk everything she’s ever lived for if she breaks high-end theft’s rule number ten: Never let your guard down.

If you like books, movies, and TV shows where thieves are the heroes, and not really the bad guys, you’ll love the Thief à la Femme Series and Requisition For: A Thief Series.

I really feel the need to tell you a little bit about International Jewel Thief Gregg Hadyn too, since he and my Requisition For: A Thief Book Series were my first books and Book 10 will be publishing this fall. I wrote seven in the REQThief Series before starting the Femme Series. So here's a look at Gregg from the back cover synopsis of Book 1- A Diamond for the Taking:

HE'S A THIEF, NOT A BAD GUY…
PULLING THE HEIST THAT WILL CHANGE HIS LIFE.

International jewel thief Gregg Hadyn is stealing diamonds, and he can’t be caught. But when Gregg “accidentally” kidnaps covert espionage operative Carly Macklin during a heist, he finds that he escapes with more than he bargained for.

As Gregg wrestles with attraction for Carly versus a career that puts them squarely at odds, Denny Garret, the former FBI agent who chased Gregg unsuccessfully for twelve years—and now Carly’s boss—renews his commitment to apprehend the notorious thief.

Caught in the crosshairs of Denny’s pursuit, Gregg matches wits with his nemesis in a real-life chess game. The winner will decide Gregg’s destiny. Will he continue his illustrious criminal career? Might he get caught and go to jail? Or…could there be another, totally unforeseen, option?

Part One of the Three-Part Pilot Story.
Genres: Action-Adventure/Crime-Heist/Espionage/Romance
If you like books, TV shows, and movies (such as "Leverage," "White Collar," "It Takes a Thief," "The Italian Job," and "Ocean's Eleven, Twelve, and Thirteen") that portray thieves as the heroes, you'll love the REQUISITION FOR: A THIEF series.

My first few books (all in the REQThief series) took a little longer to write. I think the first one took around eight months. But as I contracted professional editing and began writing regularly and getting the swing of what was acceptable in the current fiction market, the time span to put out a manuscript greatly diminished. It usually takes me anywhere from three to four months now. Born to Steal only took about two!