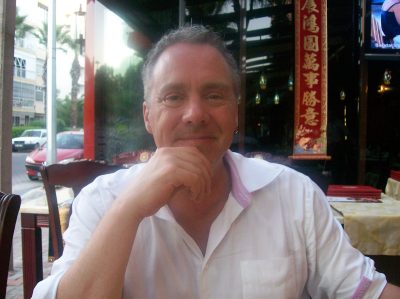 Tell us a little about yourself. Where were you raised? Where do you live now?
I was born and raised in Calgary,Canada and worked in the entertainment industry for 20 years before embarking on the adventure of traveling and teaching English. What was supposed to be a 5-year hiatus from 'Show Biz' has turned into a second act of sorts. I live in Germany now, where I still enjoy music, theatre and films but I don't make as much of any of them as I used to.

At what age did you realize your fascination with books? When did you start writing?
I've been a reader since I was a kid in elementary school. We used to order books from a catalogue that were delivered to us at school. When I was a little older I got a library card, often paying late fees as my social life expanded into my teens. I discovered the classics in second-hand bookstores. I still can't resist a good deal on a 'must read' title.
I started writing as a teen, mostly poems and song lyrics (I wanted to be a singer in a Rock & Roll band!). Later, when I was studying theatre in college, I wrote a few short plays and screenplays. "Drowning" is my first novel, which took about four years to finish (last year).

Who are your favorite authors to read? What is your favorite genre to read. Who Inspires you in your writings?
I fell in love with storytelling because of William Shakespeare, whom I met in college…
His use of language and the characters he gave us have inspired me more than any other writer.
I read Sci Fi, historical comedy and adventure stories throughout my life but recently I've gravitated to thrillers, but not because that's the genre I've chosen to write first. I want to get sucked into a thrill ride when I read, and that's what I aspire to create for readers.

Tell us a little about your latest book?
My latest book is Book Two in the Something in the Water series, which is near completion. It follows Book One: Drowning (obviously) as the characters' collision course plays out.
"Drowning" follows 'Not Yet Detective' Charles Burns and a newly formed task force of the London Metropolitan Police as they search for a missing scientist and try to stop his deadly discovery from becoming a weapon against humanity.