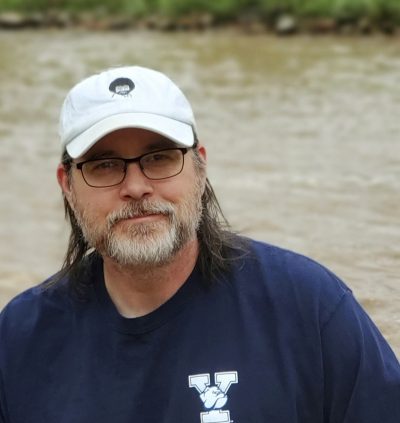 Tell us a little about yourself. Where were you raised? Where do you live now?
I've been a little of everything, I suppose. If I listed it all out, it might look like this: fry cook, range boy, greens maintenance technician, reservations agent, room service attendant, editor, banquet server, meteorologist, instructor, program manager for Internet applications, curriculum developer, training simulation engineer, leadership facilitator/coach, process improvement consultant, learning manager and organizational psychologist.

Really, I'm just a creator. I write, paint and play with woodworking tools that sometimes work together to make things. I live in Colorado with my wife, two dogs and a cat. The dogs are helpful writing companions, but the cat doesn't appear to care much.

At what age did you realize your fascination with books? When did you start writing?
I wrote my first story when I was eight. It wasn't a good story, but if I traced my history, that's where I'd say it all began. Growing up, I was surrounded by books of all sorts and because my father was a professor of biblical languages, many of those books weren't in English. He also introduced me to Tom Clancy and Louis L'Amour, two authors I still enjoy. My brother later introduced me to J.R.R. Tolkien and Ray Bradbury and I've been a fan of both fantasy and scifi since.

Who are your favorite authors to read? What is your favorite genre to read. Who Inspires you in your writings?
My favorite author is Ray Bradbury, followed a close second by Clive Barker. Their work is both magical and poetic. I stick primarily to scifi and techno-thrillers like Clive Cussler (what is it with Clives?) and have read Isaac Asimov more times than I can count. If I were to say I had an inspiration, it would be Bradbury, though. No one comes close.

Tell us a little about your latest book?
Out of Due Season: The First Transit tells the story of a genesis of a new world. From the discovery of a body in a remote lake in northwestern Washington to the eventual realization of a dream, Out of Due Season is both a science fiction novel and a thriller filled with conspiracies, terrorist plots and whacked out cultists.

I wrote Out of Due Season as the start to a series called Transit which is a journey in eight parts (books) to be released through 2025. Although the series could be considered anthropological sci-fi, it is not an examination of human life through an anthropologist's eyes . Rather, Transit is an examination of the evolution (or devolution) of the sociology of the species if the starting point were now.

The series attempts to answer the singular question: Would humanity’s sociological past follow the same general paths if it had a chance to start over?

There will be eight books in the series, starting with Out of Due Season: The First Transit.