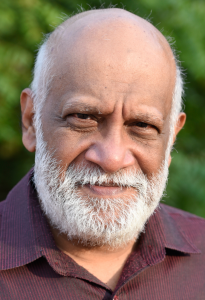 Tell us a little about yourself. Where were you raised? Where do you live now?
Anthony Nayagan left the Church altogether in his twenties, learned Vedas, Vedanta, other sacred writings in eastern religions, and avidly practiced Hinduism for three decades. Ten years before writing this book, he found his way back to the Church.
His degrees do not merit writing this book. His life experiences, interests, critical reading, radical thinking, contemplative meditation, and interpersonal relationship with The Divine contributed to this work.
This book is a journey of one who searched for the Truth all his life. The author was a teenage alcoholic, suffered homelessness, clinical and spiritual depressions, and encountered all sorts of abuses as a child. He met with divorce, loss of children, and bankruptcies. He states, "My life experiences did not defeat me. Instead, they made me stronger in the joy of gratefulness to God. In all these experiences, God remained faithful to make me learn that every attachment I held on to, is based on dualistic foundations. These will eventually perish. What is joyous and everlasting is the blessings based on wholesome knowledge; that is, the Wisdom of God."
He is married to his Shaila and living a blessed life with five children and three grandchildren between them.

At what age did you realize your fascination with books? When did you start writing?
Since 4 years old
Started writing books in 2016

Who are your favorite authors to read? What is your favorite genre to read. Who Inspires you in your writings?
William Johnston, Teilhard de Chardin, Edith Stein, J Krishnamurty, Eckhart Tolle, Paramahansa Yogananda, Deepak Chopra, Stephen Hawking, Thomas Merton, Kieran Kavanaugh, John of the Cross, Teresa of Avila

Tell us a little about your latest book?
Supreme Realization is one-hundred-percent inspired, a real-life journal of a Catholic, an ordinary sinful man who searched for Truth in all religions, even leaving the Church and staying away from it for more than twenty-five years. It is a study of Christianity in light of modern scientific discoveries that recommends a deep-seated approach based on Mystical Theology for people of all religions, for everyday life.
It breaks down complex theological and spiritual subject matters such as consciousness and self realization and recommends pragmatic approaches for a fulfilled life in spirituality. It conveys a message that there is hope in Christ. This hope promises healing, prosperity, peace and joy from a spiritual life in Christ with or without the involvement of Churches.