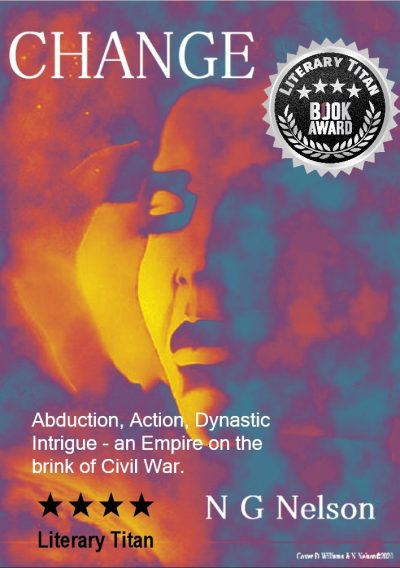 This multi-layered story takes place across many worlds. You will be drawn into the Machiavellian realms of royal court intrigue, double-agents, seduction, assassination, abduction, slavery and war. Embedded neural tech connects citizens with the Network. TransGalactic News is the premier rolling news feed – keeping the Imperial populace up to date with “The Facts”, virtually and in the real. Of course, Truth is relative. With TransGalactic News – even more so.

Follow the flight of Major Patricea Markis as she attempts to evade the forces of the New Imperium, with her charge, the young Prince Kal Jerran. Immerse yourself in the nightmare world of Paul and Bernadette, abducted from Earth for a life of forced labour in the fog covered swamps of the planet Es-Ra. Life on Es-Ra for the majority, is nasty, poor, brutish and short.

“A prophetic and breathless drama, Change is a creative explosion of visionary fiction.” Self Publishing Review: 3.5 stars.

Buy the book, and follow the author on social media:
Get This Science Fiction Book From Amazon.

Author Bio:
I live in the UK in the Midlands and CHANGE is my first novel. It recently won a 4 star Literary Titan Silver award, for books that – “expertly deliver complex characters, intricate worlds, and thought provoking themes…” I hope you enjoy my novel.

Influences: from age 6, I was reading books like C.S Lewis Voyage to Venus, Tolkien, Robert Heinlein, Philip K Dick, Isaac Asimov, Brian Aldiss – and later, E.E Doc Smith, Frank Herbert, Michael Crichton, Douglas Adams and more. When I got my cub scout reading badge in 1967, the teacher who invigilated it said I should read wider. I’d read 32 books in a year – all science fiction. After seven years of study in the 90s – I was more or less read out. But I have 3 book cases full of Blu-Rays/DVD’s – all Science Fiction. Erm – I reeally like Science Fiction.

In 1992 I went to a lesser known Oxford College for 2 years on a residential course. Oxford was an incredible, unbelievable place to study. On our first day we were bussed to the Bodleian Library to enrol, and swear an oath never to bring Fire, Kindling or Sustenance within its walls. In return for that – we could have any book we needed delivered to a desk of our choice within 24 hours. If you appreciate literature – that was the place to be.

In 1994 I studied Politics & Economics at the University of York [I completed the first year of the Economics Degree, but then dropped it. The maffs was hard – and I wanted to concentrate on International Politics]. I was Mature Student President for a year – which did wonders for my social life. I graduated in 1997, then got my MA in International Political Economy at the University of Leeds – and went on to work for two UN affiliated Non Governmental Organisations [NGOs]. I moved back to the Midlands in 2003 to work in an office again. Have worked in IT and all sorts – and at present am working remotely from home.

Socially: During the 1980’s I visited a well know Nottingham venue every Friday for Rock night, and on Saturday for Goth night. It was a total roller-coaster of a decade but I remember…most of it I was an avid follower of the post punk goth rock band “Every New Dead Ghost” and remain friends with them. In fact, Tony Ghost drums for the band “In Isolation” – so maybe check them out on Facebook. I also got dragged into the dance scene when I was in York – which was a while ago.

Anyway – enough about me. I hope you enjoy the book.