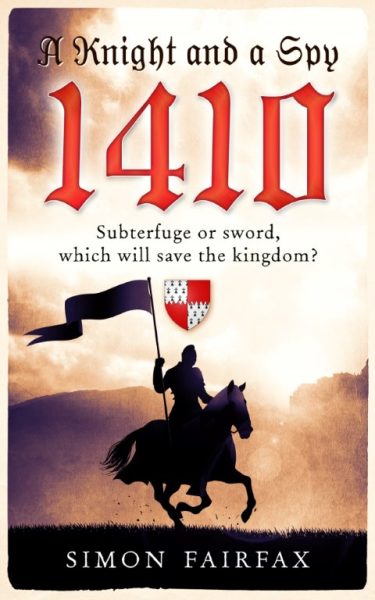 A Knight and a Spy 1410 by Simon Fairfax

Subterfuge or sword, which will save the kingdom?
January, 1410 and King Henry IV is brought down with an unknown illness. Despite his 10 year reign the kingdom is far from secure: he is at odds with his son Prince Hal who vies for a new Council; Owen Glyndower threatens his Welsh border, whilst the Scots are ever in revolt seeking secret alliances with France.

Burgundy and the French King, Charles VI plan to take back Calais and re-ignite the 100 years war. England is torn with enemies on each side and within. The court is a swirl of rumours and treachery, with the powerful seeking the ultimate prize: the English crown.

Power is controlled by unlikely forces, the most important of these men is Sir Richard Whittington, merchant, former Lord mayor of London, financier, adviser to the Crown and spy master for the King. Realising the peril of the kingdom, he needs someone who can move inconspicuously abroad and at home. Skilled yet unobtrusive.

Jamie de Grispere: squire in training, son of a merchant, known to Whittington, is tasked to do his bidding and spy for the good of the crown. He holds the future of the realm in his hands. It is a perilous path, from the depths of France to Wales and the Scottish borders. Joining with two comrades he seeks to aid the crown and Sir Richard’s plans for the safety of the realm.

Treachery, the 100 years war, revolts, battles, the wool trade, piracy and pivotal events: all are brought alive in this story of the 15th Century England and the fight for the crown.

He is a former Chartered Surveyor, Editor of an online polo magazine (having played polo for a number of years) and has practiced martial arts, fencing and shooting. He now restores old classic sports cars for fun.

As a lover of crime thrillers and espionage, Simon turned what is seen by others as a dull 9 – 5 job into something that is exciting, and as close to real life as possible, with Rupert Brett, his unwilling hero.

His new medieval series now has three books released in a proposed 6 book series. The first, A Knight and a Spy 1410, is set in a tumultuous time at the English court. It tells the story of Jamie de Grispere, squire in training and his two companions as they fight the French to save Calais, Welsh treason and Scottish revolts. The third in the series, A Knight and a Spy 1413 will be published in August 2022.