You are here: Home / Featured Books / A Distance from Avalon: when the dying and the dead reunite by Mike Messier 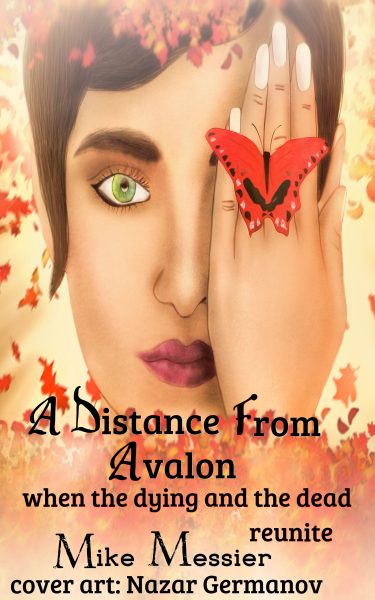 A Distance from Avalon: when the dying and the dead reunite by Mike Messier

Joe Humble, a middle school history teacher and a father of three, is in the middle of a painful divorce. Joe’s Halloween night becomes an adventure when his co-worker Shadow, a newly hired music teacher, invites him out for a night on the town.

Shadow leads them to a Castle with the door opened by the alluring Heartbreak, who in turn takes us to the master of the house, the mysterious, charming, and gothic Jean La Croix Distance.

While the ladies seem to find a common ground, the two gentlemen can’t help but challenge each other’s wit, intelligence, and world knowledge. Eventually, wine and conversation cool their tempers.

After a marvelous meal, an indecent proposal of a “no guarantees, no strings attached” partner swap for the rest of the evening leads the two mix-matched couples to share feelings of profound empathy and, eventually, spoils of the flesh that are later revealed to be mere tools for manipulation and indoctrination.

Would it be too much to share that there is more to our hosts than what at first seems?

As Jean and Heartbreak’s motivations are revealed, Joe must choose whether to make this odd yet fascinating place his new home or to somehow find a Distance from Avalon.

Get This Horror Book.

Messier was a co-writer on the horror film The Manor and a script consultant on the documentary Lennox Lewis – The Untold Story.

Mike’s passion for writing has led him to write stage plays, screenplays, poetry, and novels including his new coming-of-age novel Fight or Play Basketball: every shot counts and Art and War of Directing Student, Low & No Budget Movies: a primer for creating and participating in independent films, television & web-series.

Mike is also the creator of the Avalonia Festival of Short Films etc and Avalonia Photography Competition (www.avaloniafestival.com).

Mike was born in Virginia and has also lived in North Carolina, Rhode Island, Maine, and Florida.