You are here: Home / Action & Adventure / Xander and the Assassin’s Gift by Rand Law 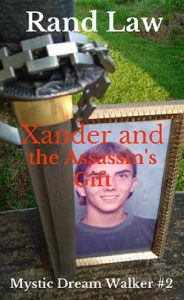 Xander and the Assassin’s Gift by Rand Law

This book is the second of nine books from the Mystic Dream Walker series. The Mystic Dream Walker series spans several genres. At heart it is an action adventure story, but within the course of time, it delves into science fiction, fantasy, para normal happenings, and a love story within a conspiracy mystery. The study and practice of the martial arts is a cornerstone in each phase of the journey.
Xander Davidson struggles with the conspiracy of his family and the group that is actively trying to manipulate him to join them or die. The young dream walkers learn an early lesson to be careful about whom they let into their circle, it could be a killer mistake.
This second book in the Mystic Dream Walker series continues from where a young Xander Davidson has dream encounters with mysterious martial art sages. He ponders if his dreams are real, or if he is living a fantasy. He tries to keep his secret dream world to himself as he copes with abuse and the mystery of his family’s past. Death lurks near him although even the hunters begin to fear an invisible prey that can see them coming.

Author Bio:
My background in writing started first as a reader. By sixth grade I was writing stories that my homeroom teacher read to my classmates as a reward for completing assignments. This recognition from teachers continued as I went on to other schools. Likewise, my martial art instruction began around the sixth grade. I hold ranks in several martial arts but I now chiefly practice kempo and jujutsu.
I have worked as a paper boy, farm laborer, in construction, food service, small business management, personal protection, as a constable and a police training officer. I hold a Menkyo Kaiden in Tokoshi Bujutsu. The martial arts are a core element in my life and in my writing, I draw heavily from this background both for the combat and the esoteric elements. I primarily use the Lee Stanislavsky method with my writing. It seems to me that the greatest truths are revealed in fiction, because fiction can expose light in dark areas too painful to acknowledge.
I have been interested in both writing and the martial arts all of my life. Writing has been cathartic for me as has the martial arts. As I grew I sought out instruction in hapkido as it matched many of the teaching and principle of kempo (but with amazing kicks). After this I moved on to American blended systems of martial arts. I have worked on a youth outreach program where I gave full or partial martial art scholarships to deserving youth across the country. During this time I taught from my background of eclectic martial arts composed of Chinese, Korean and Japanese influenced systems. Meanwhile I continued to study via seminars over the years with many world class Martial Art Masters in an assortment of systems.
Outside of martial arts I love reading, art, writing, movies, snorkeling, hiking, biking, target shooting, winter camping, and playing and listening to music. I often unwind by playing (poorly) on the harmonica or a Cigar Box Guitar.