You are here: Home / Featured Books / We Were Brave by Cap Daniels and Melissa Mason 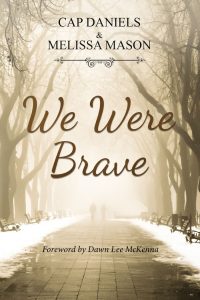 We Were Brave by Cap Daniels and Melissa Mason

When New York Times best-selling novelist Cap Millhouse finds himself alone, destitute, and defeated on the cold winter streets of his hometown, his former fame now buried beneath mountains of despair, his new reality dances in the wake of decisions he can never undo and memories he can never escape.
Imprisoned inside his own psyche, Millhouse believes his death is the only path capable of finally putting his demons to rest. An unlikely friendship with Anna, a young college student and aspiring novelist, reminds him of the importance of telling the story that lies inside all of us. Their friendship and stories may have the power to pull him from the depths into which he’s allowed himself to plummet.
As Anna’s past is revealed and redemption hangs in the balance, Millhouse must overcome his deepest regrets to face the truth that the most disgraceful act of his past may have been the defining moment of salvation for a family torn apart by war and personal tragedy.
The emotional journey of lives intertwined by loss, loneliness, and unseen common bonds unfolds in this unforgettable story of overcoming mental illness and the agony wrought by dark deeds, to finally reveal the beauty that so often grows from the remnants of tragedy.

Author Bio:
Although this is the first time Melissa Mason’s name has appeared on the cover of a novel, it is far from her first collaboration with Cap Daniels. Sharing their love of all things nautical, Cap and Melissa owned and operated a sailing charter service on Florida’s Emerald Coast for years. They are longtime scuba diving partners, cruisers, copilots, and adventurers. Their common love of education and travel, as well as their appreciation for great food, wine, and people from all over the world, has sent them far and wide, collecting memories, stories, and unforgettable friends. Melissa is a behind-the-scenes creative partner on the Chase Fulton Novels, Cap’s best-selling action-adventure-espionage series, and her voracious reader’s appetite gives her the “ear” for how fiction should flow, feel, and evoke emotion. Melissa’s beautiful style of storytelling is the perfect complement to Cap’s gritty character development.
Business ventures, adventure travel, and co-writing is merely the tip of the iceberg of Cap and Melissa’s partnership. They’re happily married empty nesters who never plan to stop collecting memories together and creating stories from all over the world.
Email: Cap@CapDaniels.com