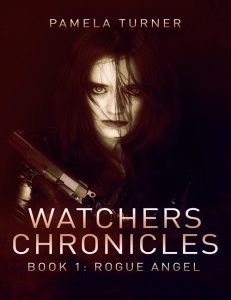 Archangel Raguel investigates crimes involving angels. When he inadvertently kills a young woman and her son while trying to apprehend a malevolent angel, he quits his job, unable to justify his actions. But his self-imposed retirement is interrupted when Semyaza, leader of the Watcher Angels, also known as the Grigori, asks him to find Penemuel, the Watcher who taught humans to write, and who has disappeared. Meanwhile, fellow Watchers Azazel and Gadreel, who taught mankind how to make weapons, learn someone is interfering with their gun-running operation on the Dark Net.

As Raguel investigates first Penemuel’s disappearance, then his murder, he finds himself drawn into the world of the Grigori. Semyaza seems to have an agenda, but is it related to Azazel’s and Gadreel’s operation? And what about the mysterious and reclusive Sariel who’s come out of exile for one reason: vengeance. But will his desire for revenge destroy humanity?

Author Bio:
Pamela Turner drinks too much coffee and wishes she could write perfect first drafts. Publications include Death Sword (a Chanticleer Blue Ribbon Paranormal Awards 2013 Finalist), Exterminating Angel, and The Ripper’s Daughter. Her short dark suspense story “Family Tradition” was a finalist in the EPIC 2014 EBook Awards. She’s also an award-winning screenplay writer. A member of the national chapter of Sisters in Crime, she’s currently vice-president of the Louisville Chapter. Besides coffee, she likes cats, cemeteries, and old abandoned buildings.