You are here: Home / Featured Books / Wasting Time on Mars by A.M.R.Taylor 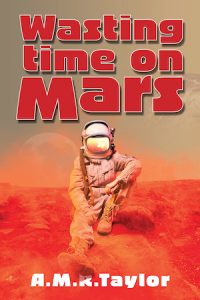 About Wasting Time on Mars by A.M.R.Taylor

Book #2 in the Time on Mars Trilogy.
The struggle between Earth’s superpowers for supply of Helium-3 from Mars has escalated into full-blown nuclear war. The colony is cut off and soon discovers a murderer in their midst. Before Mike, the Head of Security, can apprehend the killer, forces from Earth arrive and occupy the colony to secure the Helium-3. The colony resists and discovers they have more assets than they realised – one colonist is more than they appear to be and a small group of colonists escapes and trains to become an elite military unit. More warring forces arrive from Earth, and while the battle rages overhead, Mike and the Leadership Team scramble to expel the occupiers, find the murderer in the colony, and stay alive.

Author Bio:
A.M.R.Taylor was born in 1973 in Honiara, The Solomon Islands. In 1978 his parents, a geologist and a maths teacher, moved to Sydney. After working in business for many years he became the primary carer for his three children and began writing fiction. Wasting Time on Mars is his second novel.