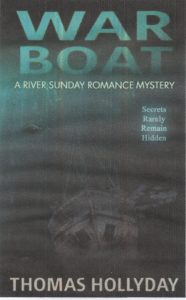 About War Boat by Thomas Hollyday

In 1941
a Chesapeake town built a war boat to
attack a U-Boat marauding its shore.

Was its
sinking the work of a traitor? Were all the dead volunteers betrayed to the Nazi boats?

Now, a grandson enters the town’s dark hidden world for the
truth.
John Thornton and his archeologist pal, Dr. Clarissa Pebbles, risk their lives to uncover the secret Nazi plan that could have changed America forever. Thornton’s personal goals undergo radical change as he finds himself caring more for others, far more than he did as a cutthroat business success.

It’s a mystery told within the shadows of World War Two and the hunts for hidden war criminals. Add the natural beauty of the Eastern Shore of Maryland to its traditions and legends of good and evil. Thomas Hollyday has had much critical success with his Chesapeake fiction and non-fiction. Enjoy War Boat, his new and fascinating page turner for your reading pleasure.

War Boat is the ninth book of the acclaimed River Sunday Romance Mystery series by Thomas Hollyday. The author’s unique Chesapeake voice once again gives us an exciting read about the people, their beliefs and legends, and the grasping mud and black water wetlands of this mysterious American region. His other critically acclaimed novels include Slave Graves, Magnolia Gods, Powerboat Racer, Gold, Terror Flower, China Jewel, Easter Sunday, and Power.
Each book, introducing new memorable characters, retains the simple and beautiful lifestyle, history and beauty of the Eastern Shore of the Chesapeake Bay. Powerful subjects written for the family such as freedom, atomic war, racism, religion, terror, sailing, and family love, are approached. Stories are insightful and well researched with technical expertise, humor, and fast moving action. See Thomas Hollyday Author Page at Amazon Author Central.

Author Bio:
Thomas Hollyday (1942-present) was born in Easton, Maryland. His father was an acclaimed photographer and his mother a brilliant teacher. His father’s family were active in the history of Maryland since its settlement while his mother’s family were prominent in Democratic Party politics. His grandmother’s family descended from a well known German industrial family of Baltimore who financed privateers in the War of 1812. He grew up in the southern atmosphere of the Eastern Shore with its maritime and military heritage. He studied writing with Elliott Coleman at the prestigious Johns Hopkins Writing Seminars and with C. Michael Curtis of the Atlantic Monthly. He served with distinction in Vietnam and afterwards became a successful international businessman. He invented and manufactured the unique all purpose outdoor winter and summer waterer for animals, the Solar Sipper, which sells all over the world and accentuates his interest in drinking water resources for wildlife. He also draws illustrations for national magazines and publishes maritime history. He currently edits popular video blogs on you tube for his books, for animal water rights and for book reviews. He continues to please his fans with Animal Viewpoint cartoon books and with critically acclaimed novels in his River Sunday Romance Mysteries collection. In his fiction he describes his recurring theme that human settlers since prehistoric times in the Chesapeake region have left a mist of legend and history that permeates its modern stories with a certain compelling truth. At the same time he incorporates the influence of machines and animals on their human owners. Each novel, located in the fictional town of River Sunday, Maryland, also records the continuing beautiful nature of the Chesapeake. His writing portrays with great insight today’s problems, conflicts, and memorable local characters with their loves and their continuing combat with evil.