You are here: Home / Featured Books / Twice Upon A time by D.Davidson – R. Marcano 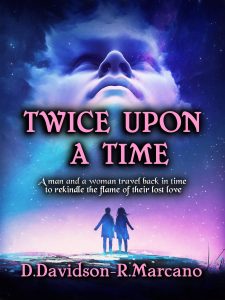 Twice Upon A time by D.Davidson – R. Marcano

A man and a woman traveling back in time to rekindle the flame of their lost love. Fifty some odd years have passed since Julie Scott and James Barlow have seen each other. They had been high school sweethearts in 1960 but unusual circumstances ended that relationship and they went their separate ways. James moved away and married. Julie remained a local girl and married a homegrown boy. Now James is a widower of two years and Julie a recent widow.

When James suffers a near-death experience, it lures him to the world of the impossible. James had been haunted by the break-up with Julie and mostly blamed himself. Now he believes he has found a way to make amends. James has discovered a means to go back in time—back to 1960 with a chance to start over again.

James and Julie consort with a young teenage girl, Zulime, who has been given a special gift of White Magic. She has the incredible ability to see and speak with the dead—and if she so chooses—initiate the dangerous process of Astral Projection Time Travel. James and Julie appear at first glance to be successful but the paranormal journey turns out to be a cataclysmic event with shocking consequences.

Author Bio:
The co-authors, D. Davidson and R. Marcano grew up on Long Island and New York City. They have been lifelong friends and their unique relationship has weathered the test of time. After serving together in the U.S Air Force in South Korea the two men formed an unshakeable bond. Although life would take them down separate paths and eventually separate them by three-time zones—their time in Korea would remain their strongest connection. Now their common goal is to share their life experience with others. They enjoy writing Historical fiction/Romance novels but sometimes expand their literary world to include Time Travel and Paranormal Romance. “Twice Upon a Time” takes the reader on an extraordinary journey that somehow makes the impossible seem possible.