You are here: Home / Featured Books / To Touch Eternity: A Memoir of Miracles by Joseph Padgal 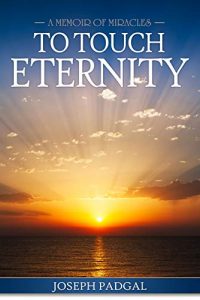 About To Touch Eternity: A Memoir of Miracles by Joseph Padgal

To Touch Eternity consists of miracles that defy explanation, near-death experiences that will take your breath away, lessons not taught in any classroom and truths that will set you free.

Read it if you dare!

Buy the book, and follow the author on social media:
Get This Memoir Book From Amazon.
Visit the Author’s Twitter page.

Author Bio:
Joseph Padgal was born July 24th, 1948 in a small southwestern Michigan town. He lived, along with his parents and sister in a former 100-year-old farm house that had once housed a doctor’s office. At the age of sixteen he started writing short stories about his life growing up in the town where he lived, about his faith in God and his family. After graduating from high school he enlisted in the armed forces, eventually ending up in South East Asia because of the war in Vietnam. After his honorable discharge from the military he lived at home for awhile eventually moving to Kalamazoo, Michigan where he met and married his wife of 37 years. He retired in 2008 and wrote his first novel ‘Firedance’ which he finished and had published in 2010. All three books in the Firedance trilogy are based on forgiveness which he states is much needed in today’s world. In his fourth novel, Padgal again demonstrates through his life story how to use forgiveness as a healing tool and offers viable steps for the individual who has difficulty forgiving anyone of anything. As with his first three novels, his fourth novel is well written, contains the elements of humor, suspense, crisis and cure.