You are here: Home / Fantasy / Titanlord: of Death & Sacrifice by M.G. Darwish 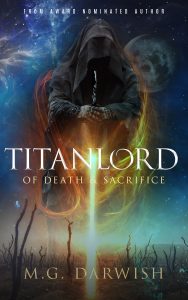 About Titanlord: of Death & Sacrifice by M.G. Darwish

The Magmars rose in rebellion against the rule of Titans and casting them into forgotten legends and myths. Then the lies began, and just as they rebelled, another gave them a taste of their own medicine when he waged war on them. He was called the Red Hand.

The Red Hand was branded a traitor and an outcast, yet within his grasp lays a deadly sword that is said to rival the power of Titans.

The Crown grew frustrated as they tried all of their tricks to stop history repeating itself, and in process revived a secret so grand it could spell the end itself.

Demons and mythical beasts roam the lands, as everyone tries to make sense of the needless war that continues to this day.

Author Bio:
M.G. Darwish is an award nominated author who writes dark, twisted and action-packed fiction. He tries his best not to base his characters on anyone he knows in real life to avoid that extra weird conversation about how they were brutalized and killed in the book. Oh and he’s terrified of a penguin uprising more than ghosts and demons.