You are here: Home / Featured Books / There’s No Such Thing As Vampires by Heather Masterson 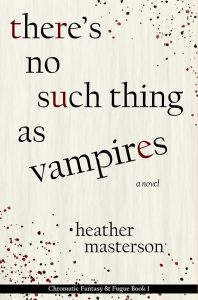 About There’s No Such Thing As Vampires by Heather Masterson

Casey was the girl who got away. Twice.
The first time, she got away because he was afraid.
The second time, she disappeared.
When the police found her car abandoned and bloody on the side of the road, Joe thought he had lost her forever.
Six months later, Joe went camping, was nearly murdered, found Casey in the woods, and then went a little insane.
It seemed like the thing to do at the time.
—–
All Ryan had to do was fly to Colorado and do a security assessment on a paranoid old lady who’d started seeing boogeymen in the bushes. She wouldn’t tell his employers what the problem was. Not over the phone, anyway.
She told the neighbors that the businessman who’d purchased her dead husband’s property was a vampire.
It was supposed to be an easy job, but when Ryan arrived too late to prevent the old lady’s murder, everything started going wrong.
Vampires don’t exist, but some kind of monster was out there. The least Ryan could do was look into it.
It seemed like a good idea at the time.

Author Bio:
Heather Masterson is a full-time public servant and resident of Colorado. She’s had the obligatory wildly eclectic work experience, including: pharmacy cashier, frozen-yogurt dispenser, phone company thrall, video store clerk, tech support geek, police dispatcher, and IT developer. She currently lives in a house shaped a little like a boxcar with her husband and various cats, and spends her free time reading, playing video games, and watching all the horror movies.