You are here: Home / Featured Books / The Virgin Whore by Meg Buchanan 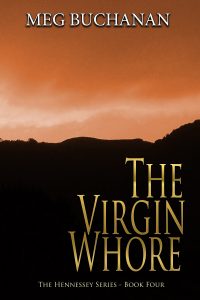 The Virgin Whore by Meg Buchanan

An unforgettable love story between two people thrown together by circumstances and treachery.

New Zealand, 1892. At thirty-seven, Courtney Samuels has his life organized just the way he wants it. His mother cooks for him, and keeps his house in order, he has friends for companionship and a mistress who meets all his other needs. Besides his best friend is married to the only woman he’s ever loved.

Then a friend of his invites him to the club to talk business and Sophie, the girl waiting at their table intrigues him. She only looks seventeen or eighteen and is beautiful, refined, nervous and a totally inept waitress. When she slops the soup on the tablecloth, he puts his hand over hers to stop the nervous dabbing at the mess and she reacts to being touched like she’s been burned.

He’s mystified, why would she react like that to being touched, especially as she’s working in a club that is primarily a brothel? He decides it’s none of his business.

As he’s leaving the premises, he sees another young girl about the same age as Sophie forced into a room and the door locked. She looks terrified, but once again he decides to walk away.

The next morning, his sister Alice arrives back from church and as he talks to her, he’s reminded of Sophie and how much Alice is like her. He can’t see Alice working at the club. She teases him and is full of plans. She’s a follower of Mrs Shepherd and is deeply involved in the fight for women’s suffrage.

He goes back to the club and Sophie asks him to help her escape. She tells him her story, and he decides he can’t ignore what is happening any longer and promises to get her away.

The Virgin Whore is the fourth book in the Hennessey series. If you like heroes who triumph against impossible odds, star crossed lovers and fighting for survival, then you’ll love this action-packed novel.

Author Bio:
I live in a small town in New Zealand, with my husband and a black labrador.
I love creating books about ordinary people doing interesting things. The characters in my story are just a little better looking and more charismatic than in real life, but they think and feel like normal people.