You are here: Home / Featured Books / The Secrets: A Mirror Estate Suspense Novelette by S.L. Fon 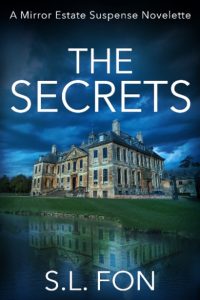 About The Secrets: A Mirror Estate Suspense Novelette by S.L. Fon

Another miserable day in an ordinary life…until now

Dylan is miserable, mourning his mom’s death, and drowning in debts. He has a mysterious key from his mother—supposed to reveal hidden secrets—but he has no idea what or where they are. Until an attorney shows up and turns his life upside down.
He’s invited to meet his grandparent—one he grew up believing dead. Soon after he arrives at the Mirror Estate, he begins hearing voices, seeing visions and feeling watched. As he begins to unravel secrets, his visit turns deadly.
Unlock “The Secrets” now. The suspense novelette is a prequel to the upcoming Mirror Estate series by S.L. Fon.

Author Bio:
S.L. Fon is an emerging mystery author, introvert, and thinker who has been infinitely passionate about the written word for as long as she can remember. What started as an interest in writing back in high school and an unfinished novel, eventually culminated into seeing a book through to completion and publication. Deeply influenced by the writings of Daniel Silva (the Gabriel Allon series), Mary Higgins Clark, and J.K. Rowling (the Harry Potter series), she crafts clean suspense and enticing mystery New Adult books infused with elements of their masterful storytelling.

Most recently, S.L. Fon released her debut novelette entitled “The Secrets: A Mirror Estate Suspense Novelette.” The first book of the series will be available in the near future. In addition to obtaining a Master of Business Administration degree and Bachelor’s degree, she completed various fiction writing courses.

When she doesn’t have a pen in hand, S.L. Fon is a voracious reader and crime TV shows binge-watcher. She has also been around the world, from Seattle and Hawaii, all the way to Hong Kong. In a previous life, she was more numbers-focused and worked as an accountant.