You are here: Home / Featured Books / The Real Dad: A Novel of Suspense by Mary Lynn Roddy 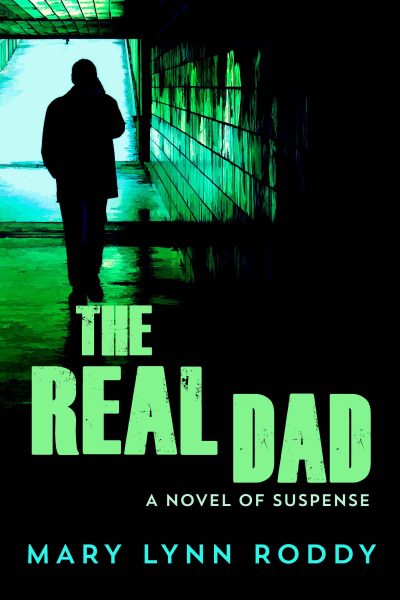 The Real Dad: A Novel of Suspense by Mary Lynn Roddy

MEN WHO TURN OUT TO BE TWO PEOPLE SHOW UP IN THE NEWS, ALL THE TIME. BUT MEN LIKE NATHAN BRANNIGAN? NO.

Lulie Brannigan, activist, songwriter, mother of two, has been married four years to her soulmate. And Nate has turned out to be the absolute stepdad of her dreams. Her children have long been calling him “Dad,”
and things are warm and cozy in the Brannigan home until a strange intrusion by Police.

A gum-chewing, silently threatening Sergeant arrests her beloved Nate and won't say why.

She is to find out all too soon, when the officers not only take him in,
but insist that she and their two little boys come along.

Within nine days, he's bailed out and thinks he can come home. He keys himself in and refuses to leave, so Lulie and boys have to go.

His case is repeatedly Continued. It's said that the prisons are full. When Lulie thinks he's back in jail, he starts stalking them.

They run, they move, they even hide, but the three can't shake him.

Nate will stop at nothing to get his family back.

Author Bio:
The author was born in Nahma, Michigan and raised in Gladstone.
After that, she resided in Milwaukee, San Francisco, and Evanston, IL.

When Mary Lynn was eight-years-old, she was told the family would be moving out of the Village of Nahma.

“Well, I'm not!” she responded. They'd never replace the large, picketed
yard with two apple trees and a strawberry patch, she knew that.

And what about the four little friends she so cherished? Could
grown-ups really pull this on their kids?

Ah yes, she found. Days later, as their Dodge wound slowly out of town, the little girl cried and cried. Soon, her mother handed back some folded-over papers. “Try to write down just exactly how you feel,” she said. Once that was all completed, Mary Lynn felt ever so much better.

After that, she wrote. In Diaries with tiny keys, in Journals, all her life.

“Someday, I'll write a novel,” she told everyone.

And, like her favorite childhood character, The Little Red Hen, one day
she did.