You are here: Home / Featured Books / The Other Side of Silence the hidden strength by Prashanth Chakkula 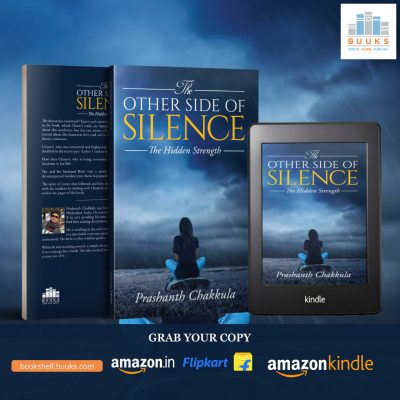 The Other Side of Silence the hidden strength by Prashanth Chakkula

The doctor has examined Chaarvi and stated that it is strange to conceive that the characters in the book, which Chaarvi reads, are haunting her. The doctor admits that he has read about this syndrome, but this one seems a bit different. “I have treated patients who feel excited about the characters they read and it seems this falls under the same category,” the doctor continues.

Chaarvi, who was concerned and frightened, replied in a shaky and unclear voice, “it has doubled in the recent past. Earlier I used to be excited, but now it makes me frightened.”
How does Chaarvi, who is being tormented by this peculiar problem, deal with actual incidents in her life?

She and her husband Rishi visit a newly constructed building to purchase a flat. An unexpected incident puts them in jeopardy.

The series of events that followed and how the couple addressed the challenges that arose with the incident by dealing with Chaarvi’s problem form the crux of the tale that unfolds within the pages of this book.

Buy the book, and follow the author on social media:
Get This Thriller Book From Amazon.
Visit the Author's Facebook Fan Page.

Author Bio:
Prashanth Chakkula was born, raised, and completed his graduation in Hyderabad, India. He considers his faith to be the most important to him. If he isn't spending his time learning new things, you can almost always find him touring destinations in India.

He is working in the tech sector and always loves exploring new ideas. He is a successful corporate professional, and he dons his life roles with enthusiasm. He loves to play outdoor games, a jack of many sports but master of none.

When he was traveling around, a couple of experiences and stories motivated him to explore it as a concept for a book. The idea seemed interesting, which then inspired him to develop a story out of it.