You are here: Home / Featured Books / The Modest Proposal Institute by Paul James 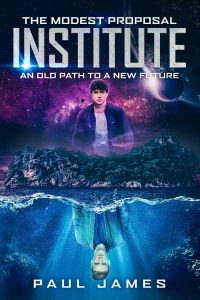 The near-future comes to life in this dystopian sci-fi series of a boys’ school for those with the ‘right stuff’.

Seeing where the Western world was headed, two men start an offshore school for gifted boys and men – The Modest Proposal Institute, focusing on science, technology, engineering, maths and medicine. It’s modeled on schools of the past. After the disastrous 2021-22 Recession, and the increasing cold brought on by the Solar Minimum, the growing success of the Institute’s boys and men drives Western leaders to attack the Institute and try to take its wealth.

Young Alexis knows he’s destined to be a leader. Convinced that he’ll save the planet from its slow decline, he’s excited to best every one of his rivals at the prestigious Modest Proposal Institute. If only that pale brainiac Shane would get out of his way…

Shane has vowed to be part of the change the world so drastically needs. Driven to use his superior intellect to outsmart his classmates, he can see the top spot in sight. At least, until he meets his match in Alexis.

As the school’s competitive projects challenge the boys’ leadership, Alexis and Shane happily resort to underhanded tactics to gain the advantage. Can they rise above their personal battles or will their constant rivalry deal a fatal blow to humankind?

The Modest Proposal Institute: An Old Path to a New Future is the first book in the Modest Institute YA sci-fi series. If you like futuristic contests, ambitious heroes, and tough social challenges, then you’ll love Paul James’ unique glimpse of tomorrow’s society.

Author Bio:
Paul James is an engineer with a life-long interest in books and writing. Originally from England, he’s lived with his family near Toronto, Canada, for many years and where he walks, runs and takes wildlife photos whenever the weather will let him. In his writing, he likes to capture the humorous side of life even when sometimes the world doesn’t seem to warrant it — as we saw in his earlier book, Diary of a Canadian Nobody.

For his new series, The Modest Proposal Institute, he’s returned to one of his earliest loves — science fiction.