You are here: Home / Featured Books / The Hidden Rose by Abby Gordon 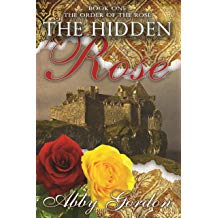 About The Hidden Rose by Abby Gordon

Secrets, adventure, treasonous plots that threaten a valiant secret order –
Owain was dedicated to three things – Wales, the Order of the Rose, and most of all, his cousin – Elizabeth Tudor. From the moment he met the mysterious Anna Elizabeta, he denied the attraction. Yet when England’s spymaster sends them on a mission, Owain throws caution to the wind and claims her. When she won’t tell him her secrets, Owain rejects her upon their return to court. It takes an act of treason for Owain to realize what was his. To recover Anna, Owain must lead the Roses against a stronghold of the Sons of Scion – the Order’s archenemy.

Secretive, proud and the hope of the Order, Anna Elizabeta finds herself in Elizabeth’s court. Espionage and threats she can handle, but her attraction to Owain and the way he fills her mind isn’t something her training covered. He brings her to life on their mission to Tutbury, prevents her from killing the Scots queen, and then rejects her. Reeling from that, Anna realizes she must make a different path. But plots and treason swirl and with the future in danger, Anna prays that Owain can find her in time.
The hope of the future is theirs – if they dare to hold it.

Buy the book, and follow the author on social media:
Learn more about the writer. Visit the Author’s Website.
Get This Romance Book From Amazon.

Author Bio:
I’ve two series in the works. The Order of the Rose is historical romance about a secret society that stands against an ancient enemy that wants control of church and state, thought and deed. Beginning in the reign of Elizabeth Tudor with The Hidden Rose, the next six stories are outlined and will take you through Europe as the Roses love and fight their way to survive. Love in the Shadows, erotic romance, is about members of the Shadows Club – men and women who learn to express all the ways of love. This series takes my first several books, and many others, organizing and rebooting into a cohesive collection. The First Connection is available as a free novella and the next two – The Submissive’s Touch (previously The Master’s Choice) and Fall of Adonis are complete, with the next two frantic to be written.