You are here: Home / Fantasy / The Hangman: Vengeance by Dee Rose 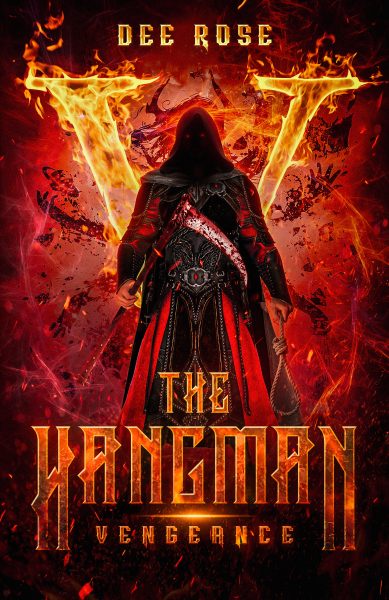 The Hangman: Vengeance by Dee Rose

The Hangman has returned from the unknown dimension he was sent to at the end of The Death Brothers: A Supernatural Awakening. Now, he only has vengeance on his mind for the people, who tricked him that he once considered friends and allies. They include the heroes; The Grand Librarian, Alexander Merryweather, the demon hunter, Father Tom Padilla, Susan Taki, and reluctantly, the vampire slayer, Jericho Caine.
Leechadon the Soul Eater, a powerful demon and the new leader of the underworld, uses the opportunity to attack the Earth by bringing together four allies of his own. They are; the vampire lord Dracool, a witch named Alina, a zombie leader, Deadric, and a demon lord, Gregor. If they can work together, they represent the greatest threat to humanity that has ever been assembled.
Leechadon strikes a deal with Hangman to help get his revenge in exchange for the Hangman agreeing not to interfere with Leechadon’s plans for the Earth. The past, present, and future play relevant parts in this adventure. Allegiances are tested as both, humans and supernatural forces, clash in this epic finale to the Hangman series.

Author Bio:
Dee Rose was born on July 5th and resides in Denver, CO. He is the father of two daughters, Nadia and Nicole. “They are my life,” he says. He attended Metropolitan State University, where he majored in Political Science. The Hangman is his third published novel and he plans to make it into a series. “Novels like The Hangman are the reason I started writing in the eleventh grade. I love taking readers on an incredible journey.”