You are here: Home / Featured Books / The Girl Who Would Be Queen by Jane Ann McLachlan 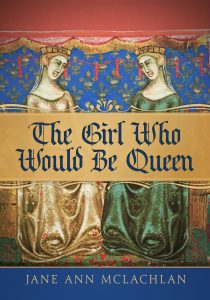 About The Girl Who Would Be Queen by Jane Ann McLachlan

Princesses Joanna and Maria were raised to be queens; no one prepared them for murder.

When King Robert the Wise, ruler of one of the wealthiest and most sophisticated kingdoms in Europe, dies in January 1342, he has named as his heir his sixteen-year-old granddaughter, Joanna, or, if she dies without issue, her thirteen-year-old sister Maria. Born in a male-dominated world in the passionate south of Italy and surrounded by ambitious male cousins with an equal claim to the crown, will these sisters be able to maintain control over their kingdom? With only their wits, beauty, and the love of their people to aid them, Joanna and Maria, bound together by their strong love and fierce rivalry, are prepared to do anything to hold onto their beloved kingdom.

If you enjoy true-to-life historical fiction based on real people, with all the passion, drama and court intrigue of Medieval Europe, you’ll love The Girl Who Would Be Queen, written by multi-award-winning author Jane Ann McLachlan.

Author Bio:
J. A. McLachlan was born in Toronto, Canada. She is the author of a short story collection, CONNECTIONS, published by Pandora Press and two College textbooks on Professional Ethics, published by Pearson-Prentice Hall. Walls of Wind was her first published novel, followed by two YA novels, The Occasional Diamond Thief (2015) which was featured in the US National library magazine VOYA and won the Book Publishers of Alberta Award for science fiction, and The Salarian Desert Game (2016) which made the Canadian list of Best Books For Kids and Teens, both published by EDGE Publishing. Her first historical fiction novel, The Sorrow Stone (2017), won the Royal Palm Literary Award for Historical Fiction. The Girl Who Would Be Queen (March, 2019) is her second historical fiction novel. When she isn’t writing, teaching creative writing, or talking about writing, she may be gardening, quilting, reading, researching or traveling to the location of her next novel.