You are here: Home / Fantasy / THE ELFKIN JOURNALS: Blending of the Races by JDeVereS 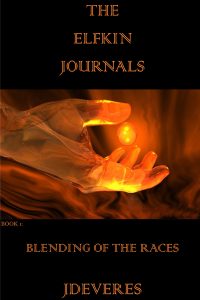 THE ELFKIN JOURNALS: Blending of the Races by JDeVereS

Warder Garith De’ Graoin and Doctor Lan De Tian lead a team of “Misfits” on a quest to save their universe from a plague that is sweeping through an entire civilization. Utilizing the power of bonded mind stones, they shape the energies of the universe to reach across time and space seeking out the enemy.

As the most elite team of Warders in the Elfkin Federation… they are assigned the responsibility to enter an alternate universe… find the weakness in the aggressor’s system and stop the plague. Unfortunately, the enemy they face possesses genetic mutations that make them the equivalent of ‘minor gods’.

What can this tiny team of 7 multi-racial Elfkins do against an entire Empire?

WIN! They either win or two civilizations will devolve into primal chaos.

From their tiny resort camp on the third planet from a minor sun… they must embark on a journey that does not understand the concept of time as a linear progression. They must win a battle using the curvature of time and the energies of two universal sources.

In this battle there is no safe place to hide… your dreams, your future, your past… even the shadows of the night are all susceptible to attack.
…
“There is really nothing else Ramas and I can teach you in preparation for this challenge… our chances of success will depend more on your brains rather than your swords.” Garith panned a slow, hard-eyed, look across the team… then shaped a small smile. “Remember, all you have to do is defeat a minor God!”
“Okay – when I open the gate… you go!” Garith’s mind stone flared… his hands shaping an intricate pattern, duplicating the images formed in his mind, as he carefully opened the ‘lightway’ that would take this team to the rebel leaders.

“Dell r’… get ‘em in there…” The ‘lightway’ flared as five shadowed figures moved toward the gate.

Ramas watched as Dell r’ rushed through first… his greatsword in a neutral position… not threatening… but instantly ready for action. A mountain of iron hard muscle… with arms like braided steel… flaxen hair tied back in a tight braid… facial features locked in a grim battle-set.

Ramas chuckled as he thought quietly to himself. “Bet that look will put the rebel leaders in line really quick.”

“The stars be with you!” Ramas patted Rison on the shoulder as he stepped through with Muirisc tight by his side.

“The stars be with you!” In the darkness of the chamber, Ramas reached out with one hand to encourage the final two travelers. He knew that the Council had assigned a ‘protector’ class warrior to the team at the last moment but he had not yet seen the man in person. There had not been enough time to check every detail of every plan… at some point he had to trust the judgement of other personnel. Briefly glimpsed intelligence reports indicated that he was some kind of giant Elf with archaic armor straight from the legends of ancient times.

“Whoa! What was that…?” As the warrior surged passed, supporting the ‘ailing’ Ala, Ramas’ hand brushed the ‘protector’s’ armor. Instantly, his hand recoiled as if struck by a strong shock. Less than one second later both figures were gone and the gateway closed.
“Interesting…” Ramas pursed his lips in a moment of thought… his features totally neutral. “The wheel turns as the wheel turns… I must rethink some of our plans.”
…
In the tradition of Tolkien and Asimov this novel invites you to step into new worlds of thought!

Author Bio:
It is my expressed opinion that, to the 98 percentile, there is no such thing as a pure fiction fantasy novel! As an author, I can give my characters pointed ears or retractable fangs… I can place them on a separate world or universe… but, in the end, I am writing about real human emotions, true human responses to various situations, actual human interactions!

“The Elfkin Journals: Blending of the Races” is a fantasy/science fiction novel that speaks to the ancient adage the “power corrupts and absolute power corrupts absolutely”.

In this novel, a team of “Misfits”, living in a resort compound on the third planet from a minor sun, travel to an alternate universe to end a reign of tyranny that is the result of a race with superpowers losing their human “touch”.

Based on my international travels, I became fascinated with the similarities between many of the Earth’s ancient myths and legends. Spending years travelling throughout Southern China and Asia, I fell in love with the sagas and the people of these lands. I was already familiar with the Western world’s legends, but travelling around Asia gave me a new perspective. Eventually, the concept of a combined Elf team fighting to save 2 separate universes crystallized in my mind.

Natural wonders I have seen around the world allowed me to create vivid images of real-life settings such as Bridalveil Falls in Yosemite, Di Tian waterfalls between Viet Nam and China, The Grand Canyon in Arizona and the Chinese Grand Canyon called Tongling.

The good-hearted, open-minded, people from around the world that I have met in my life gave me the foundation for “the good guys”… the self-centered, closed-minded, people that I have encountered in life became the basis for my tyrants.

As I was constantly in a travel mode for nearly 2 years it took me that entire time to finish this novel from start to finish.

What was tough for me to write were the heroines. Sorry, but I’m one of those thick-headed guys that needs things explained to him again and again in VERY patient terms. But the “bad guys” were easy for me as I have little tolerance for small-minded people who believe there is only one “right” way to live life.. and only one right way to love! LIFE IS ABOUT GROWTH!

Hopefully, “The Elfkin Journals” will open a few minds to new thoughts and ideas.

In the end, there are a few quotes from this novel that capsulize my basic life principles.

“The only lasting treasures are those you hold in your heart – not your hands!”

“Life is a moment in eternity – Love is eternity born in this moment of Life!”

“Of all creative arts – the greatest wrought – is that of a life well-lived!”

As a former “blue-ribbon” winner in digital art contests… the cover image for my book is from one of my original works… “Hues of Creation”.

I hope you enjoy this novel!