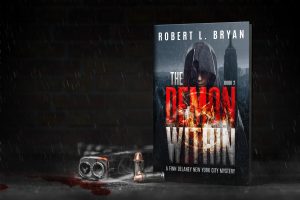 About THE DEMON WITHIN A Finn Delaney New York City Mystery, Book 2 by Robert L. Bryan

Are there dark forces operating in the world that terrify us so much, we refuse to recognize their existence
In The Demon Within, novice private eye Finn Delaney inadvertently releases these dark forces when his two year old murder case takes him onto an unexpected, dark, and dangerous path.

We’re taken on a journey into a spiderweb of satanic rituals and the occult in the shadowy corners of New York City.

Despite the recent success of a newsworthy case where he located a missing girl, Finn is a man still wrestling with the reality of having his hopes, dreams, and family tradition of police work snatched from him. We follow Finn on his next big case – a two year old ritualistic murder where the mother of the convicted murderer is certain of her son’s innocence.

Finn’s lack of experience and knowledge in his new career is palpable. In over his head, out of his depth, and totally lacking experience, Finn unknowingly opens the door to a dark and dangerous world of which he knows nothing – demonic possession.

With the possibility of an innocent man being driven insane from two years inside a hospital for the criminally insane, Finn’s investigation has accomplished nothing except making an enemy of the high priest of a satanic church. Finn Delaney’s world is about to take a very dark turn

Make no mistake, this is a crime novel for today’s discerning reader, and with its undercurrents of dark rituals, the occult, demonic possession, and the effective use of plenty of dynamic comic relief from Finn’s irresponsible, but irreplaceable best friend, Kevin Malone, it zips along at a breakneck pace that will keep the most jaded reader on the edge of their seat.

Author Bio:
Robert L. Bryan was born in Queens, New York, and has been a life long New York City resident. He retired after a twenty year career with the New York City Police Department at the rank of captain, and is currently the chief security officer at a New York State government agency. He is also an adjunct professor in the homeland security department of a NYC college. Robert has written several short self help and security / law enforcement related books. His first full length book, “CONDUCTOR” was inspired by his son’s career choice, and details the history of the railroad conductor profession. His next two books -“C-CASE” and “DARK KNIGHTS” are non-fiction accounts of his experiences with the NYPD. Both books won awards in the 2017 Public Safety Writers Association writing competition.